Saturday Night Live decided to take viewers back to the colonial era while gearing up for Sunday night’s Super Bowl — all while featuring some special guests.

SNL alumni Tina Fey and Rachel Dratch joined host Natalie Portman in a sketch highlighting the rivalry between the New England Patriots and Philadelphia Eagles, as colonials celebrate a victory of the Patriots over the British at Bunker Hill.

“We are the Patriots of New England and we are unstoppable!” Dratch declares with Portman and other cast members by her side.

As the group of Patriots celebrates being “number one,” another colonial remarks: “I recognize that New England wins battles, but must they be so obnoxious about it?”

But as the Patriots continue their revelry, they’re interrupted by the delegation from Philadelphia led by Fey, who declares, “Philly’s mad strong.”

The two groups sling barbs at each other, with Fey telling the Patriots their “precious captain Thomas Brady” is “old” at 40, “four years past life expectancy.”

The two groups eventually decide to settle this “outside” with a ready-to-fight Dratch saying, “One if by land, two by your mother.” The remaining colonials are left to declare that both are the “worst,” hoping that there’s some way for both groups to lose. 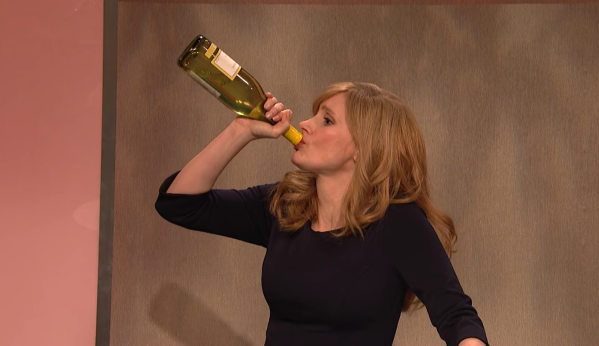 SNL Asks 'What Even Matters Anymore'?
Next Up: Editor's Pick