Trump's Approval Rating Is the Highest It's Been in Nearly a Year, Poll Finds

President Donald Trump smiles while delivering the State of the Union address.
Bloomberg—Bloomberg via Getty Images
By Jamie Ducharme

A new poll says President Donald Trump’s approval rating is the highest it’s been in nearly a year — a fact the President promptly took to Twitter to reiterate.

Rasmussen Reports’ daily Presidential Tracking Poll for Friday listed Trump’s approval rating at 49% among likely U.S. voters, the highest approval rating Trump has earned since March 7, 2017. Another 49% of respondents disapprove of Trump’s performance, according to Rasmussen.

“Rasmussen just announced that my approval rating jumped to 49%, a far better number than I had in winning the Election, and higher than certain ‘sacred cows,'” Trump tweeted in response. “Other Trump polls are way up also. So why does the media refuse to write this? Oh well, someday!”

Trump’s approval rating during his first year in office stayed between 35% and 45%, the worst of the seven most recent presidents, according to Gallup. Nonetheless, a late 2017 Gallup poll found that Trump is the second-most admired man in the U.S., after only his predecessor, Barack Obama.

An NBC/Wall Street Journal poll from around the same time, however, found that only 36% of registered voters would support Trump for reelection in 2020.

In the latest Rasmussen poll, which dropped just a few days after Trump’s first State of the Union address, 35% of respondents said they “strongly approve” of Trump’s performance, versus 38% who “strongly disapprove.” 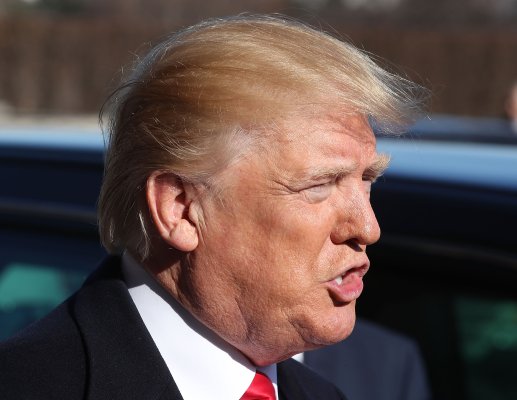 Donald Trump Is Ending His First Year as the Most Unpopular President in Modern History
Next Up: Editor's Pick