Figure skating is not all about the jumps. But even the most diehard skaters and fans who will tune into the figure skating programs during the 2018 Winter Olympic Games will tell you that it’s mostly about the jumps. Especially since 2006, when the International Skating Union created its new scoring system that puts a strong emphasis on difficult elements that skaters perform on the ice.

When it comes to figure skating jumps, you can sound like a skating expert by noting there are actually two kinds — edge jumps, which take off from the edge of the skate blade, and toe jumps, which start when the skater taps the jagged pick at the end of the blade into the ice for upward momentum.

What makes figure skating jumps different from one another is not just the way skaters take off, but also how they land — for example, whether they land on the same leg from which they launched or the opposite leg. Each jump is assigned a certain number of points, depending on how difficult they are to master. At the Olympics, a nine-person panel of judges can give a jump a grade of execution (GOE) between -3 and +3 based on execution and performance, and will factor into a skater’s technical element score. Judging the individual jumps includes a technical panel, which determines whether a skater fully rotated in his or jump and identifies which kind of jump it was.

For female skaters, the most difficult versions of these jumps are triples, with the triple axel being the most challenging. Only eight women have landed the triple axel in competition, and two of them — Tonya Harding and Mirai Nagasu — are from the United States. Nagasu is competing in PyeongChang, South Korea for the 2018 Winter Olympic Games opening on Friday, Feb. 9, and plans to repeat her triple axel feat in both her short and long figure skating programs.

Here’s your cheat sheet for telling six figure skating jumps apart during the Winter Olympics, from an axel to a toe loop, salchow and lutz jump.

The simplest of the six jumps, the toe loop starts off with a forward approach on the inside blade edge. Then, the skater switches to a backward-facing orientation, kicking off with the backward outside edge and using a toe pick to add lift before landing on that same outside edge, for a maximum of 10.3 points.

In the Salchow, the skater takes a backwards approach and launches using their inside edge before landing on the opposite outside edge. It’s worth 10.5 points.

Different from the toe loop, the loop starts with a backwards approach on the outside edge, which builds the power to launch the skater airborne. They come down on that same outside edge, for 12 points when done correctly.

The flip begins with a forward approach before the skater switches to their backward inside edge, using the toe pick of the other foot to launch themselves into the rotations. They return to the ice on the outside edge of the same skate. This one is worth 12.3 points.

The second-most-difficult jump at 13.6 points, the Lutz takes a long backward approach. It is another toe-pick-assisted liftoff, using the outside edge to lead the movement. The landing flips to the outside edge of the opposite foot.

Finally, the Axel. Worth 15 points, it’s the only forward-facing jump in the skater’s arsenal. It starts off with an outside edge launch and ends up with the skater finding their footing on the outside edge of the other foot. 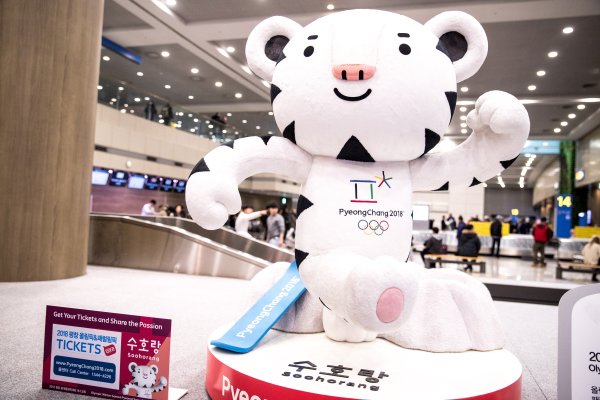 The Mascot for the 2018 Winter Olympics Is Soohorang the Tiger. Here’s Why
Next Up: Editor's Pick