The House Just Released the Nunes Memo. Here's What It Says

House Republicans released the full, un-redacted “Nunes memo” on Friday following months of speculation – and as expected the GOP memo alleges the FBI was biased in its investigation of ties between Donald Trump’s 2016 presidential campaign and Russia.

The memo zeroes in on the “Steele dossier,” an unverified document that was allegedly paid for by the Democratic and Hillary Clinton’s presidential campaign. The memo, overseen by House Permanent Select Committee on Intelligence Chairman Rep. Devin Nunes (R-CA), alleges that the dossier was an “essential part” of the evidence used to authorize surveillance on Trump advisers and that its origins and ties to Clinton and the Democrats were never disclosed to the court.

The so-called “Nunes memo” which is three and a half pages, centers around the FBI obtaining a Foreign Intelligence Surveillance Act (FISA) warrant in October of 2016 against former Trump campaign policy adviser Carter Page. Nunes claims that an “essential part” of obtaining the FISA court warrant was the use of the Steele dossier – which was compiled by former British spy Christopher Steele alleging compromising details that Russia may have on President Trump. The dossier, a copy of which was published in full by Buzzfeed last January, alleges that Trump’s former campaign manager Paul Manafort used Page as an intermediary with the Russian government and that Page attended a secret meeting at the Kremlin in July of 2016.

The memo cites testimony from Deputy FBI Director Andrew McCabe—who is now stepping down—in which he told the committee no warrant for Page would have been sought without the use of the dossier.

The Nunes memo also alleges that the FBI did not disclose Steele was working for Fusion GPS, a firm working on opposition research on Trump for a lawyer representing the Democratic National Committee and the Hillary Clinton campaign.

Additionally, the memo claims that Steele had told a former Senior official in the Department of Justice, Bruce Ohr, whose wife was working for Fusion GPS that he did not want Trump elected, and that Ohr had handed that research to the FBI—but the FBI had not disclosed the relationship between Steele and Ohr in the application.

The committee released the memo publicly on Friday afternoon.

“The Committee has discovered serious violations of the public trust, and the American people have a right to know when officials in crucial institutions are abusing their authority for political purposes,” Nunes said in a statement accompanying the release.

The House Intelligence Committee voted to release the memo last Monday, and it was promptly sent to the White House. But the vote was strictly on partisan lines, and drew condemnation from Democrats, who authored their own counter-memo. House Minority Leader Nancy Pelosi even called for Nunes’ resignation. Rep. Adam Schiff, the ranking Democrat on the committee, said Wednesday night that the version of the memo sent to the White House was different from the one the committee voted on, and the FBI issued a rare public statement expressing “grave concerns” about the memo’s accuracy.

“In order to understand the context in which the FBI sought a FISA warrant for Carter Page, it is necessary to understand how the investigation began, what other information the FBI had about Russia’s efforts to interfere with our election, and what the FBI knew about Carter Page prior to making application to the court – including Carter Page’s previous interactions with Russian intelligence operatives,” Democrats on the committee said Friday in response to the release. “This is set out in the Democratic response which the GOP so far refuses to make public.”

Read the full Nunes memo below: 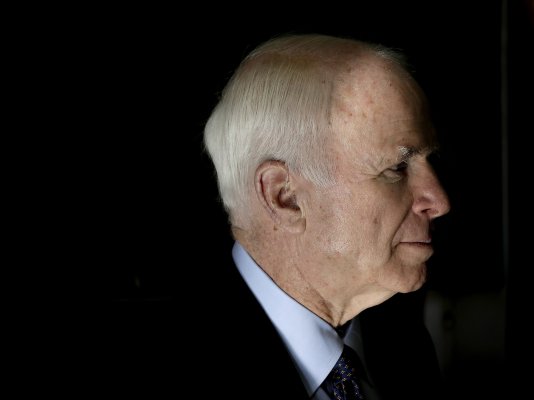 John McCain Says Trump Is 'Doing Putin's Job for Him' by Attacking the FBI
Next Up: Editor's Pick