It’s a feat that hasn’t been achieved for more than six decades, but reigning Olympic figure skating champion Yuzuru Hanyu isn’t known to let a little thing like precedent get in his way. The 23-year-old — already known by some as the greatest figure skater ever — is competing in the 2018 Pyeonchang Winter Olympics against skating stars like Spain’s Javier Fernández and the U.S.’s Nathan Chen in an attempt to reclaim the men’s figure skating gold medal. The last male singles skater to win gold at two successive Olympics was America’s Dick Button in 1948 and 1952.

But Hanyu, known as Japan’s “Ice Prince,” has to overcome more than just the weight of history if he’s to seize the title in a back-to-back win. A severe ankle injury kept him off the ice and unable to train for more than two months. He’s made a comeback before, including after abdominal surgery, and he’s still favored to place on the Olympic podium. After coming out on top in the men’s short program on Feb. 16, he’s in good position to continue on his quest.

At the 2014 Sochi games, Hanyu’s routine broke the 100-point scoring ceiling, setting a world record with 101.7 points for his short program. He went on to claim gold, even though he fell twice during his free skate. Hanyu was the first male skater representing an Asian country to take gold, and the youngest since Button.

Disappointed by his less-than-perfect Sochi performance, Hanyu pledged to return to the next Olympics with an unblemished showing. It’s a pledge he is already keeping.

Here’s what you should know about Yuzuru Hanyu.

His coaches said he would compete, but it was an open question since a media blackout was imposed on his training and he hadn’t been able to compete since November last year.

Hanyu took an ill-timed tumble while practicing a difficult, four-revolutions jump called a quadruple lutz ahead of the NHK Trophy on Nov. 9. The awkward fall caused bone, tendon and ligament damage.

Pressure to master such injury-risking jumps has increased, in part, with the rise of teenage jumping prodigy and U.S. national champion Nathan Chen – Hanyu’s expected rival at Pyeonchang and the first in the sport’s history to land five quadruple jumps in a single routine.

Despite a prolonged recovery period that forced Hanyu to skip several qualifying championships, he was named to Japan’s Olympic team and is one of their top hopes for a gold medal.

At one point, Japan’s Kyodo news agency said that Hanyu would not participate in the men’s figure skating team event. Then his coach confirmed he would be performing in the individual competition.

Hanyu Has the Luck of Winnie the Pooh on His Side

Hanyu is never without his Winnie the Pooh teddy bear tissue dispenser. He’s known to hug his rink-side companion for good luck just before getting on the ice, and to bring the cartoon character along to interviews. Pooh Bears have become a mascot for Hanyu’s besotted fans who sport Pooh ears and throw Pooh plushies onto the rink after his routines.

Due to corporate sponsorship rules, the Pooh talisman will have to stay in the dressing room during the Olympics however.

When the devastating Tōhoku earthquake and tsunami hit Japan in 2011, Hanyu was near the epicenter, skating at his hometown rink in Sendai. As the tremors caused water pipes to burst, Hanyu, then just 16, reportedly rushed off the ice with no time to even put skate guards on his blades. His family slept in an emergency shelter for three days.

Ultimately, the disaster became a motivating factor in his career. In his autobiography, Blue Flames, Hanyu wrote that the earthquake “totally changed my values.” He joined other skaters in a benefit show to raise recovery funds and when he won the Olympics three years later, Hanyu called it “a gift for my country.”

While skating competitions have increasingly boiled down to who can do quads (a jump with at least four revolutions) as cleanly as possible to maximize points, commentators and fellow skaters praise Hanyu for his well-rounded performances, which combine technical precision with artistry and athleticism.

Hanyu’s performances tend to cross gender lines not only through the incorporation of elegant, dramatic and emotional dance choreography more often prized in women’s skating, but also through the moves he executes. Beyond proficient jumps, Hanyu’s routines are packed with elaborate spins like the Biellmann – a one-foot spin where the other foot is lifted above and behind the head. The move is more popular with female skaters, as it requires a great amount of flexibility to pull it off. Hanyu’s spins are so iconic that fans have even named one move the “Hanyu spin.”

As a child in primary school, Hanyu said he almost gave up on figure skating. He wrote in his autobiography that while he had loved the adrenaline of competitions since he was in kindergarten, he loathed the monotony of practice. His father played baseball, and in the third grade, Hanyu said he decided he wanted to pursue professional baseball instead. It took the temporary closure of his hometown rink one year later and a long commute that limited his time on the ice for him to realize the importance of practicing and his commitment to skating.

Here’s When Hanyu Skates Next for the Medal

After completing his Feb. 16 short program with a personal best record breaking 111.68 points, ahead of Spain’s Javier Fernández and Japanese teammate Shoma Uno. Hanyu will take to the ice for his free skate once more on Feb. 17 in South Korea — which means it will air in the U.S. on NBC’s primetime coverage and online on the evening of Friday, Feb. 16. 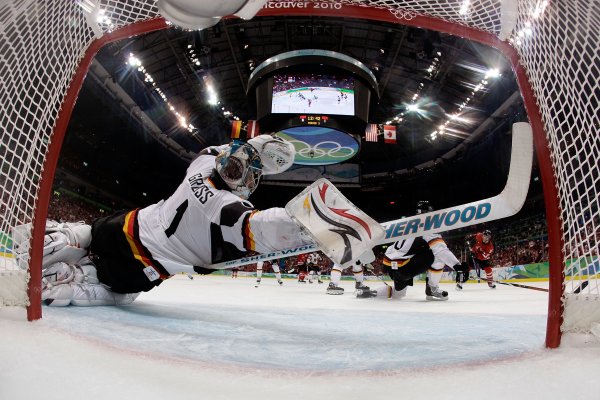 This Is Every Country's Favorite Winter Olympics Sport
Next Up: Editor's Pick