Dreamers Are Americans Too

President Donald Trump applauds while delivering a State of the Union address to a joint session of Congress at the U.S. Capitol in Washington, D.C., on Jan. 30, 2018.
Win McNamee—Bloomberg/Getty Images
Ideas
By Lorella Praeli

Ahead of Tuesday night’s State of the Union address, the White House promised that President Trump would deliver an appeal for national unity. Yet the actual speech inspired only further division and proved to be another installment in the Administration’s ongoing effort to portray immigrants as dangerous threats.

Alongside falsehoods about current family reunification policy and slander about immigrants and crime, Trump’s speech attempted to justify a White House immigration proposal that would exchange urgently needed protections for Dreamers for a host of nativist policy goals. What President Trump described as a “fair” and “down-the-middle compromise” is anything but — his vision treats young immigrant Dreamers as bargaining chips in exchange for a harmful and wasteful border wall, further increases in deportations executed by Immigration and Customs Enforcement (ICE) as well as Customs and Border Protection (CBP) agents and a dramatic reduction of legal immigration flows in an attempt to reverse the growing diversification of America. His aim is to use Dreamers hurt other immigrants.

The crisis facing Dreamers and their families is urgent, but young immigrants will not be blackmailed into trading their own safety for provisions that harm border communities, expand the detention-and-deportation dragnet, keep families separated and embrace the racist immigration policy vision of the 1920s. To correct the infamous line from the President’s speech: the country already recognizes that “Dreamers are Americans too.” We need Congress to act and the White House to stop playing games with these young people’s lives.

Keep in mind: the crisis facing Dreamers is entirely of the President’s making. Trump’s September announcement to end the Deferred Action for Childhood Arrivals (DACA) program was engineered by anti-immigrant leaders, including Attorney General Jeff Sessions, White House Adviser Stephen Miller and state attorneys general like Texas’ Ken Paxton. Their goal all along was obviously to dangle Dreamers newfound peril in exchange for policies to overhaul the immigration system in a direction long favored by anti-immigrant nativists. In another context, or in another administration, these radical ideas would never be seriously considered by Congress. Nor should they be now.

The cynical approach currently imperiling Dreamers is part of a larger destructive immigration agenda that is already being implemented by this administration. Whether demanding that passengers on a Greyhound bus in Florida prove their citizenship, targeting 10-year-old Rosa Maria Hernandez in hospital after surgery or openly embracing the fear they are sowing in immigrant families via indiscriminate deportations, CBP and ICE are trampling on basic human rights.

Immigration enforcement agencies also have been targeting immigrants and their allies who speak out against their inhumane practices. Across the country, a growing number of immigrants’ rights advocates are ending up in immigration detention, facing deportation or being threatened with criminal charges. And the Trump Administration continues to use the specter of gangs and criminality to justify sweeping and unconstitutional crackdowns against immigrant youth and asylum-seekers.

Meanwhile, the Department of Justice and the Department of Homeland Security are each escalating their campaigns against communities that have decided to limit their entanglement with Trump’s indiscriminate deportation agenda. Through threats, scapegoating and shaming, and despite multiple defeats in the courts, they are seeking to force these jurisdictions into abandoning their ongoing responsibilities to their residents and adherence to the Constitution.

Beyond any of these specific examples is the larger erosion in what had once been a bipartisan consensus and shared recognition: that immigrants are a source of strength and vitality for the country. Instead, through words and actions, the Trump Administration is telling the country that immigrants are to be feared and immigration restricted, no matter the cost to our values or economic interests.

We all need to stand up for a different vision of America than the one advanced by President Trump in the State of the Union address and throughout the past year. That starts by standing up for a clean solution for Dreamers. More than 20,000 DACA recipients already have lost their status and ability to live and work legally in America. They and hundreds of thousands of other Dreamers — young people who know no home but the United States — need a solution that only Congress can deliver. It’s now up to responsible lawmakers of both parties to move a clean Dream Act forward, while rejecting attempts by the White House and its allies to hold Dreamers’ futures hostage to unreasonable and unrelated measures. 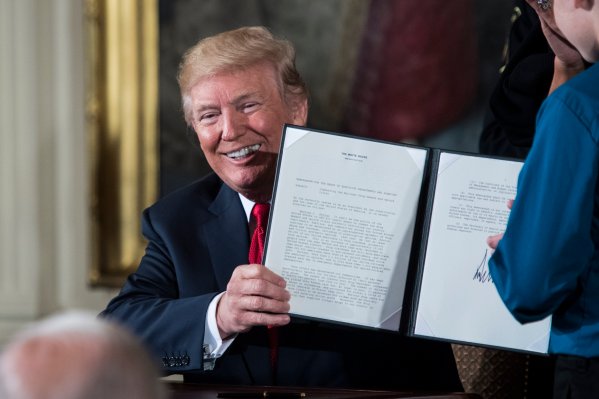 Sen. Hassan: Trump Has Been All Talk, Little Action on the Opioid Crisis
Next Up: Editor's Pick