Everything We Know About the Samsung Galaxy S9 So Far, From Rumors to Release Date

Samsung is just a few weeks away from releasing the long-awaited Galaxy S9, the latest in its long line of Android-based Apple iPhone competitors.

Companies like Samsung are notoriously tight-lipped about what their upcoming smartphones might look like, or what features they might include. So far we know for sure when Samsung’s Galaxy S9 will be officially unveiled, and that Samsung is pitching the S9’s camera as a main selling point.

But there’s an entire cottage industry built up around smartphone rumors and leaks that we can use to glean some more information about the Samsung Galaxy S9’s potential features, specs, price and more.

Here’s what we know about the Samsung Galaxy S9 so far.

Samsung will unveil the Galaxy S9 (and likely a larger Galaxy S9 Plus version) on Sunday, Feb. 25 during Mobile World Congress (MWC) in Barcelona, Spain. Samsung typically begins shipping new smartphones within a few weeks of announcing them. So it’s a safe bet you’ll start seeing the Galaxy S9 on store shelves and available online by mid-March or so.

The Galaxy S9 price isn’t clear yet. But it’s likely to be comparable to Apple’s most expensive phones — that is, in the $699-$999 range.

The U.S. version of the Samsung Galaxy S9 could use Qualcomm’s Snapdragon 845 processor, which will help it take better pictures and video, enable new artificial intelligence improvements, and result in overall better and more efficient performance. The Snapdragon could help improve the battery life on Samsung’s Galaxy S9 without physically larger batteries, too.

The Samsung Galaxy S9 that will be sold in other parts of the world might use Samsung’s own Exynos processor instead of the Snapdragon, CNBC reports.

The camera will be a chief selling point for the Galaxy S9, if Samsung’s promotional teaser is any indication. The aforementioned Snapdragon 845 processor would certainly help in that regard. The Galaxy S9 could get some improvements in the camera system itself, too, with a 12-megapixel rear-facing camera featuring an f/1.5 lens, Forbes reports. A lens with that wide an aperture would certainly help with low-light photography.

Samsung’s Galaxy S9 is rumored to have some bonus features that might excite some Android fans out there. Samsung is reportedly working on big improvements to its eye-scanning tech, for example, making it more secure and function better than it does on previous Galaxy models. There’s also a chance the Galaxy S9 could have some kind of face-scanning unlocking feature similar to Apple’s Face ID system.

There have been rumors that the Samsung Galaxy S9 would include a fingerprint scanner built directly into the touchscreen, but recent reports say that might not be the case after all.

Also worth noting: The Galaxy S9 could feature an FM radio option, Tom’s Guide reports, allowing users to tune in to local radio broadcasts. That may seem a little retro on such a high-tech device, but it’s an option that some people have long wanted. 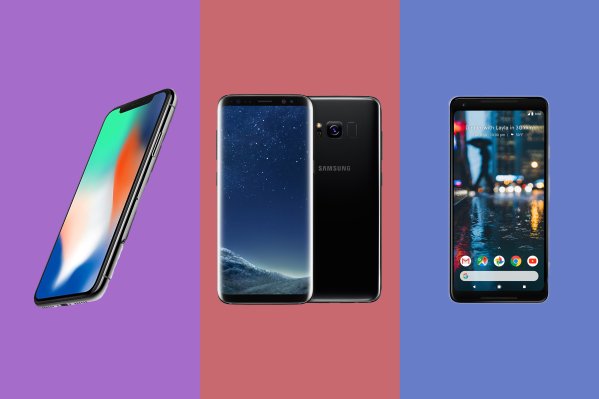 The 5 Best Smartphones You Can Buy Right Now
Next Up: Editor's Pick