This Clean Energy Research Has Been a Bipartisan Priority for Decades. Donald Trump Wants to Cut It by 72%

The Trump Administration has moved to dramatically cut funding for a Department of Energy program supporting research and development of clean energy technologies, the president’s latest attempt to stall renewable energy sources like wind and solar to benefit fossil fuels.

The 72% cut would be imposed on the Energy Department’s Office of Energy Efficiency and Renewable Energy, according to a Washington Post report. The office, which received $2 billion in funding the current fiscal year, supports research in a variety of clean energy technologies from electric vehicles to to solar power.

For those reasons, the cuts are unlikely to be approved by Congress. Top Republicans have balked at the Trump’s past efforts to cut funding for renewable programs. “The president has suggested a budget,” Republican Sen. Lamar Alexander of Tennessee said last year in response to similar proposals. “But, under the Constitution, Congress passes appropriations bills.”

But protests from fellow Republicans are unlikely to stop Trump’s broader energy agenda. The Administration has launched a multi-pronged effort to stem the growth of renewable energy sources while propping up the ailing coal industry. Trump has proposed new rules to support coal-fired power plants that are not financially viable, cut climate change programs and imposed a steep tariff on imported solar panels.

Energy analysts say that those moves are unlikely to help coal companies, a Trump constituency, though they may still hurt the growing renewable energy sector. The Energy Information Administration, the federal agency responsible for energy data, shows coal production falling in the next two years. Meanwhile, solar power companies have already experienced a slowdown as a result of the tariffs. 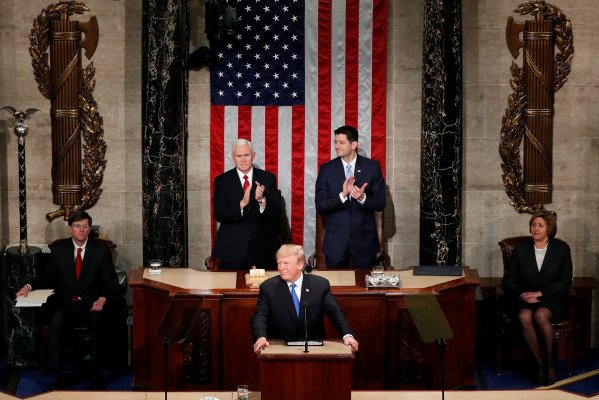 Trump Falsely Said State of the Union Was Most Watched
Next Up: Editor's Pick