Like the Microsoft co-founder, Coram was a self-made businessman who turned his life to philanthropy, with a reputation for radical thinking. A portrait of him by his friend, the celebrated painter William Hogarth, shows the buttons of his coat undone, his feet barely touching the ground, as if he’s about to bolt from the artist’s studio. He hasn’t bothered to wear a wig either, rare in Georgian portraiture. He looks like a man in a hurry.

Coram was born in Britain but spent his formative years in the American colonies, where he made his fortune as a shipbuilder and naval captain. His life was the American Dream realized, 100 years before the Declaration of Independence was even written. Coram brought the lessons learned in America back with him to London, where he founded the first charity for children, The Foundling Hospital. Born without rank, Coram championed social mobility and the rights of children, particularly those who were illegitimate and abandoned by wider society. In doing so, he changed the way a whole society saw the rights of children.

Now, 350 years on from his birth, his lessons are still proving relevant. “So much in modern human rights and children’s rights, Thomas Coram predated,” explains Dr. Carol Homden, Chief Executive of Coram, the London-based children’s charity named for the philanthropist. “He was looking at society and the individual’s duty to care, come what may.”

Born in 1668 in Lyme, Britain, Coram came from humble origins. He would later joke about his lack of a formal education, writing to a friend: “I am no judge in Learning, I understand no Lattin nor English neither, well [sic].” He was sent to sea at 11 years old, before returning five years later to be apprenticed to a shipwright. His talents were soon noticed, and in 1694 he was sent to Boston to establish a new shipyard. For the next ten years, Coram lived in New England and accumulated a significant fortune. Untethered from the confines of English propriety, he was buoyed by the opportunities America offered. But he soon ran into trouble with his puritan neighbors in Taunton, where he moved after Boston; his outspokenness attracted enemies and even an attempt on Coram’s life.

So in 1704, Coram sailed for Britain with his American wife, Eunice. He was shocked by what he found: the “inhumane” sight of abandoned children’s corpses on London’s roadsides.

At the time, child mortality rates in Britain were high, as were levels of poverty. The newly popular drink gin had acquired the nickname “mother’s ruin,” and the stigma surrounding illegitimacy and “fallen women” offered few bright spots for the children caught up in those circumstances. The only places for illegitimate infants were parish poorhouses, where children often died of neglect. Struck by the egalitarian society in America and the opportunities it had afforded him, Coram set about changing Britain’s attitude towards its most vulnerable members of society.

In 1722, Coram embarked on what was to be a 17-year journey to establishing The Foundling Hospital (“hospital” referring then more generally to hospitality), a charity that took in infants whose parents were unable to look after them. Unusually for the period, both boys and girls were taught to read and write.

But it wasn’t easy. For years, Coram struggled to drum up support for what he called his “darling project.” His lack of social graces, which offended some of the English nobility, didn’t help his cause; he once complained in a letter that he might as well have asked the upper-classes to “putt down their breeches and present their backsides to the King and Queen,” for all the good his entreaties had done. His breakthrough came with the 1729 “ladies petition,” when he began targeting ladies of rank for donations. Ten years later, King George II signed the Foundling Hospital charter, and on the evening of March 25, 1741, at a temporary site, the hospital opened its doors, with a lottery system used for admittance.

As children were given a new identity by the hospital, for decades mothers left identifying “tokens” with their child, should they ever return. The tokens are now exhibited at The Foundling Museum in London: rows upon rows of embroidered scraps of material; engraved lockets; in one case the single sleeve of a child’s garment, the other kept by the mother.

"You have my heart..." token, on display at the Foundling Museum, London. Left with a foundling child during the eighteenth century.
Thomas Coram Foundation for Children/

The Foundling Hospital continued to flourish in part because of Coram’s famous supporters. Hogarth donated his portrait of Coram to the hospital and encouraged other artists to do the same; the institution became England’s first public gallery. And if Coram was the 18th century’s Gates, then the musician Handel was surely its Bono; his annual benefit concerts of his Messiah raised the equivalent of over a million dollars for the hospital.

Coram remained a passionate advocate for girls’ education until late in life, producing a scheme that promoted the education of Native American girls in the American colonies. But although Coram always hoped to return to America, he never did.

The legacy Coram left behind, however, continues to this day. For 150 years, the Foundling Hospital was the only charity in England that worked with illegitimate children. After it closed in the 1950s, the children’s charity Coram sprung up, which aids hundreds of thousands of children across the United Kingdom.

Those who have studied Coram’s legacy, like Dr. Homden, say that he served as an early example of someone inspired by the ideals of what would become the United States. “America enabled Thomas Coram to be the man he was,” says Homden. “And his charity, which lives on today in Coram, created the absolutely defining moment in the history of children’s rights and welfare.”

Correction: The original version of this article misstated the name of the chief executive of Coram. She is Carol Homden, not Carol Holden 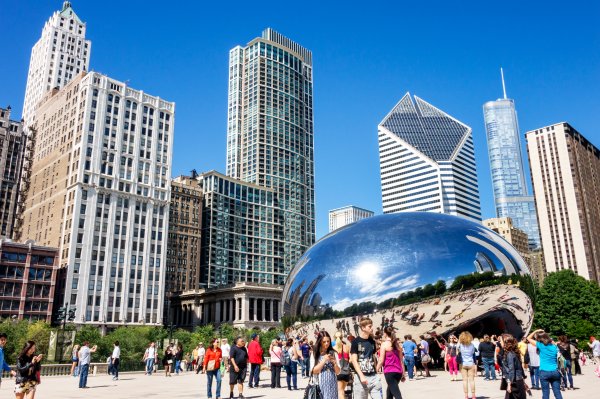 The Surprisingly Complicated Meaning of Chicago West's Name
Next Up: Editor's Pick