Why Attendees Left Davos Feeling Optimistic About the Economy

I’ve been attending the World Economic Forum in Davos for more than two decades, and I can’t recall another time when the meeting ended with attendees who were so optimistic about the economic outlook. Their reasons:

The global economy is enjoying unusual synchronicity, with every major region expanding at the same time. With unemployment low and inflation dormant, we face the possibility of several years of “high pressure” growth, in which wages and other rewards to workers will rise, after a decade of anemia. The unusual bonuses paid by some companies to workers in the wake of the U.S. tax bill are partly an acknowledgment of that trend.

Trump’s hard-line “America first” trade agenda was retrofitted at Davos into a more reasonable “America first, but not America alone.” It remains to be seen what that means in practice, but the cooler rhetoric has reduced fears of a trade fiasco.

The rapid advance of technology–and, in particular, the increasing ability to take proliferating pools of digital data and turn them into useful intelligence–carries the promise of a sea change in business productivity as well as potential solutions to a host of difficult social problems. U.K. Chancellor of the Exchequer Philip Hammond said AI could “double economic growth rates in advanced economies by 2035.”

None of that is to minimize the geopolitical threats facing the world. Nor is it to ignore the huge challenge of preparing the global workforce for the new-technology world.

Still, it’s worth savoring the moment. All may not be right with the world. But all is not wrong. Indeed, the main negative economic sentiment heard at Davos was that with all the good news, complacency may set in. As Larry Summers recently wrote, “The main thing we have to fear is lack of fear itself.” 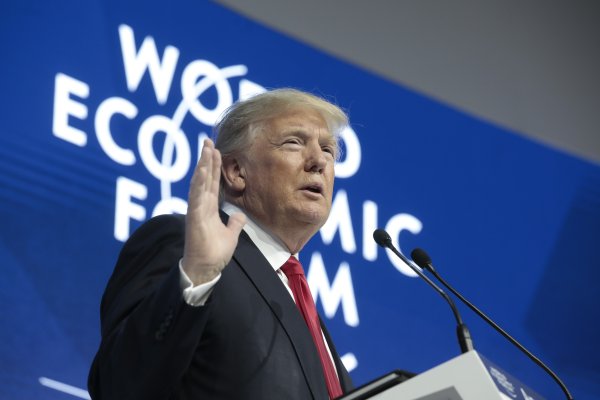 Donald Trump's '15 New Friends': Here Are the Executives the President Dined With at Davos
Next Up: Editor's Pick