What Happens When Amazon Takes on Health Care

What happens when a company defined by utterly ruthless efficiency sets its sights on the flabbiest part of the U.S. economy? We shall see, now that Amazon has announced that it–along with Warren Buffett’s Berkshire Hathaway and the banking behemoth JPMorgan Chase–will be entering the dominion of health care.

“The three of our companies have extraordinary resources, and our goal is to create solutions that benefit our U.S. employees, their families and, potentially, all Americans,” said JPMorgan chairman Jamie Dimon on Jan. 30, treading lightly (“potentially”) on the enormous implications (“all Americans”) that were apparent. As it takes shape, the as-yet-unnamed joint enterprise will nominally serve, without seeking profit, only the 1.2 million people who work for the three companies.

But the clear and worthy goal is to confront the Gorgon that has stymied politicians for decades.

The triumvirate combines the savvy integrity of the Oracle of Omaha, as America’s most admired investor is known; the leadership status and financial muscle of the country’s largest bank; and, crucially, Amazon. The retail and tech giant has flourished by innovating relentlessly and expanding omnivorously. Word that Amazon was entering health care immediately depressed the value of old-school health-insurance companies. Anyone who has been a customer of either knows why.

The U.S. health care system is the antithesis of Silicon Valley. Grossly inefficient and user-unfriendly, it may be the least transparent enterprise outside the Kremlin–and just as awash in money. The $3.3 trillion that Americans spent on health care in 2016 was close to Germany’s entire GDP that year. It accounted for an astounding 18% of the U.S. gross domestic product–twice the share other developed countries typically spend on health–and produced a return on investment that would get any CEO fired. Life expectancy in the U.S. is actually going down.

“The ballooning costs of health care act as a hungry tapeworm on the American economy” is how Buffett put it in the six-paragraph news release that offered no blueprint but what Amazon founder Jeff Bezos called “talented experts, a beginner’s mind and a long-term orientation.”

You can see where this is going. Shop for a piece of furniture online and the seller explains why it can offer a quality sofa at a reasonable price by listing the half-dozen middlemen it’s cutting out: retail warehouse, retail store, wholesaler warehouse, wholesaler showroom, export agent. It may not be possible to list the intermediaries milling about between a patient and a healer, but David Cutler, a health economist at Harvard, made the striking calculation that administration accounts for about a quarter of the cost of health care in the U.S.–perhaps double the rate in the next-most-benighted system. He once pointed out that Duke University Hospital had 900 beds and 1,300 billing clerks.

None of this qualifies as news. What does is the prospect of a new sensibility addressing the mess. Bezos became the richest man in the world in no small part by exploiting and inventing technology, like “one click.” His approach is to undercut the competition at every turn–cutting prices so low that customers were reliably pleased, and vendors had no choice but to stock his shelves. Many of the company’s half-million employees work among those shelves, at the “fulfillment centers” all across the U.S. where boxes are packed and shipped. A warehouse worker might make $15 an hour, better than retail but not enough to make anyone rich, especially after taxes and health-insurance premiums, which have been rising faster than wages.

If the triad of Amazon, Berkshire Hathaway and JPMorgan Chase can find a way to bring sense to health care, the savings will accrue first for those three companies, which are not acting out of altruism. But sometimes business interests align with human ones. Every dollar matters to an hourly worker, and when the savings from a better health care system reach the worker–and when the worker reaches a doctor without having to run a gauntlet–the vaunted, disruptive efficiency of tech will have produced a common good. 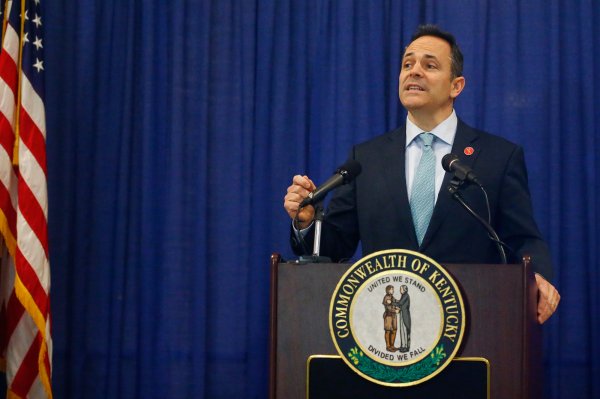 Kentucky Is First to Adopt Medicaid Work Requirement
Next Up: Editor's Pick