First lady Melania Trump claps for Police officer Ryan Holets and his wife during the State of the Union address in the chamber of the U.S. House of Representatives January 30, 2018 in Washington, DC.
Chip Somodevilla—Getty Images
By Sarah Begley

In the State of the Union on Tuesday night, President Donald Trump singled out three of his guests for special praise – Albuquerque police officer Ryan Holets and wife Rebecca, who adopted the baby of a heroin addict he saw preparing to shoot up on the street while she was pregnant.

Holets’ story came to national attention in December — a little over two months after he first met the pregnant woman, Crystal Champ. In footage captured by his body camera, Holets can be seen chastising Champ for using drugs while pregnant, saying, “Why do you have to be doing that stuff? It’s going to ruin your baby.” The video shows Champ breaking down crying after his comment.

The Holets were seated in the gallery next to First Lady Melania Trump for the president’s address to Congress. Cameras panned to the family multiple times during the speech.

In an interview with CNN, Champ said, “I was like how dare you judge me. You have no idea how hard this is … I know what a horrible person I am and what a horrible situation I’m in.”

Champ was homeless and addicted to both heroin and crystal meth, drugs which she says rule her life. When she told Holets she was looking for someone to adopt the baby once it was born, she said she noticed a change in him: “He became a human being instead of a police officer.” Holets says he felt he heard a message from God: “You will do it — because you can.” He told Champ he would adopt her child.

Holets, who was already a father of four, discussed the idea with wife Rebecca and she agreed. After the baby was born in October, they named her Hope, and saw her through her detoxing and methadone treatment. Champ says she believes it was serendipity that brought her daughter together with the Holets family: “She needs to have a safe environment and a stable life and be able to grow and be nurtured and be safe and secure and all of these things I can’t give her right now,” she told CNN.

Champ and her partner, Tom Key, are reportedly now in a rehabilitation facility. Holets started a GoFundMe page to raise money for them to pay rent after they leave the program, as well as to cover medical bills. “I am directly in control of all funds raised and personally ensuring that they are used for the previously mentioned purposes,” he wrote on the page. In the most recent update on the page, Champ and Key wrote, “We just wanted to say thank you for all your prayer, praise, and financial help. But the truth is that Ryan is the true catalyst for every thing that has happened. He is the one who deserves the praises (after God that is). Thank you for everything.”

On Wednesday, following the State of the Union, Holets gave an interview to CNN saying Champ and Key had been sober for around 40 days. “We’re sending them pictures we’re giving them updates,” he said. “We want them to be able to continue to see her and be in their life. I think she’s going to know how much they loved her. And that’s never going to be in question.” 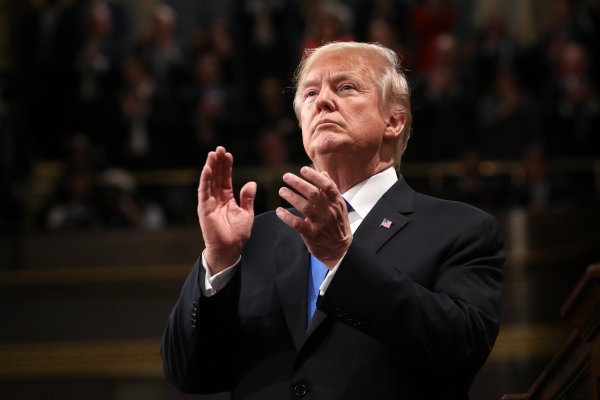 Missed the State of the Union? Here's a Recap
Next Up: Editor's Pick