U.S. lawmakers have nominated three of Hong Kong’s most prominent pro-democracy youth activists, Joshua Wong, Nathan Law and Alex Chow, for this year’s Nobel Peace Prize along with other contributors to the semi-autonomous region’s movement for political freedom.

Wong, 21, Law, 24, and Chow, 27, were among the most well-known figures in the Umbrella Movement, which seized the world’s attention during a 79-day occupation of Hong Kong’s political and financial center in 2014. Originally planned in opposition to China’s political control in election of the city’s highest executive, the protests drew tens of thousands of mostly young people to tent-laden encampments that brought the city to a standstill and awakened a new generation of political participation.

A dozen U.S. congressmen and women, including Fla. Sen. Marco Rubio and N.J. Rep. Christopher Smith, submitted the nomination to the Nobel committee Thursday, “in recognition of their peaceful efforts to bring political reform and self-determination to Hong Kong.” The congress members, several of them chairs of the bipartisan Congressional-Executive Commission on China (CECC), announced their intention to nominate the trio late last year.

Read more: Occupy Hong Kong One Year Later: What Next?

Hong Kong, a former British colony, was “handed back” to Beijing under a 1997 agreement that promised a degree of political autonomy over 50 years; the territory is governed under a parliamentary-style system and enjoys freedoms of press and expression that are not shared by mainland Chinese cities. Facing an uncertain future and fearing an ever-encroaching Beijing, the Umbrella Movement unleashed a generation of Hong Kong youths demanding a democratic future and rejecting Beijing’s authoritarian model.

“Wong, Law and Chow and the entire Umbrella Movement embody the peaceful aspirations of the people of Hong Kong who yearn to see their autonomies and way of life protected and their democratic aspirations fulfilled,” the congress members wrote in a letter to the Nobel Peace Prize committee. “The Umbrella Movement and its leadership are acting in the long tradition of previous Nobel Peace Prize Laureates who captured the imagination of their fellow countrymen and sought principled and peaceful change from within.”

While the protests failed to extract political concessions and camps were eventually forcibly dispersed by police, the movement focused global attention on Hong Kong’s democratic promise and stood as a litmus test of Beijing’s tolerance for dissent in the financial hub. Wong, Law and Chow have all since served time in prison for their role in the demonstrations; upon their sentencing in August, they were branded Hong Kong’s first prisoners of conscience. The sentences bar them from political office for the next five years.

Pro-democracy activists continue to face headwinds from Hong Kong authorities: Law, who became the city’s youngest elected lawmaker in 2016, was disqualified along with three other legislators on allegations that they insulted China during their swearing-in ceremony. Subsequently, 21-year-old Agnes Chow, another leader of the group’s political party Demosistō, was disqualified last week from seeking to replace him in a forthcoming legislative by-election.

The nomination letter also referenced Liu Xiaobo, the 2010 Peace Prize winner who died in detention in China last year. Liu’s treatment by authorities serves as “a stark reminder of China’s authoritarianism and deep disregard for universally-recognized human rights — realities that Wong, Law, and Chow seek to preserve for the city they love,” the letter said. 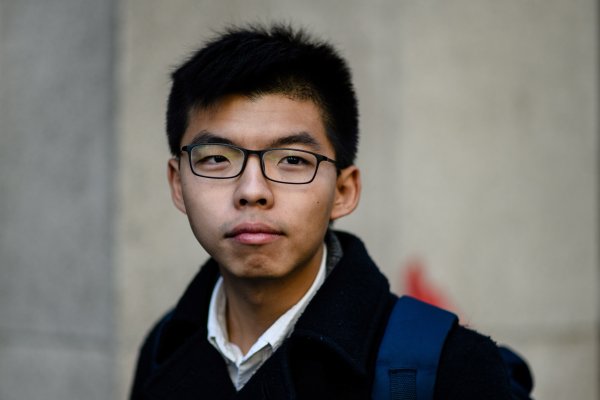