Leslie Jones Is the 2018 Winter Olympics Correspondent We Deserve

With the 2018 Winter Olympics start date fast approaching, there’s no doubt that fans are getting hyped for this extravaganza of cold weather sporting events in PyeongChang, South Korea — none more excited, however, than comedian and Twitter enthusiast Leslie Jones.

Jones, whose avid live-tweeting and online cheerleading of Team USA during the 2016 Summer Olympics earned her a gig as an NBC contributor at those games, it looks like the Saturday Night Live funny woman will be joining NBC for a second round.

In a statement, NBC president of Olympics production and programming, Jim Bell said that Leslie was a perfect fit for providing coverage of the Winter Games for the network.

“Experiencing the Olympics through the lens of Leslie is unlike anything else,” Bell said. “Her passion for Team USA is contagious, and her adventures in South Korea should be fascinating.”

The comedian appears to be just as enthused about the Winter Olympics as she was about the Summer Games, going so far as to post a video on Twitter of her working out on an elliptical machine in full American flag regalia, along with the caption that read “SLAY ALL DAY!” and tagged the Olympics account.

During the last Olympic games, Jones was a major presence, often offering humorous commentary on the competition, earnest encouragement to the athletes, and providing plenty of selfies along the way; with that in mind and this video as a good indicator of what’s to come, there’s a good chance that Jones may prove to be a true champ of the Olympics yet again.

So while there are no doubt plenty of surprises in store when it comes to who will take home top prizes at the 2018 Winter Games, one thing is for certain: Leslie Jones is the Olympics correspondent who we should all be following. 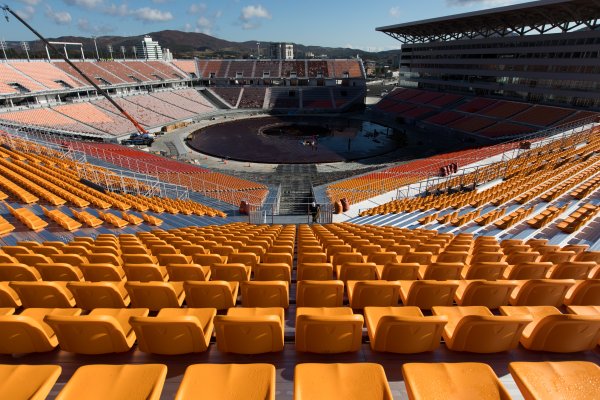 PyeongChang Will Be So Cold for the Winter Olympics That Organizers Are Giving Out Heating Pads and Blankets
Next Up: Editor's Pick