The adult film actress stopped by Jimmy Kimmel Live! for a limited but hint-laden interview following President Trump’s first State of the Union address as part of her publicity tour.

The interview with Stormy Daniels aired weeks after the Wall Street Journal reported that Trump’s personal lawyer paid her $130,000 to stop her from speaking publicly about an alleged sexual relationship that reportedly occurred while Trump was married to Melania in 2006. (Trump’s lawyer Michael D. Cohen has said Trump vehemently denies any relationship.)

Daniels was the most forthcoming when asked about a statement denying the affair that was purportedly from her.

“I do not know where it came from. It came from the internet,” she said. “That doesn’t look like my signature does it?”

But Kimmel was confident something happened. In between Shark Week talking points, the late night host tried numerous silly, circuitous methods to get Daniels to confirm the reports surrounding her and Trump. Daniels kept tight-lipped — mostly laughing in response to the leading questions.

Kimmel went on to get down to the details in an interview that the adult film actress reportedly gave to In Touch magazine before she was allegedly given the payout.

The interview details Trump’s alleged sexual relationship with the star. Daniels didn’t confirm the transcript in the interview, but said: “Well, he does have good taste, I guess.”

In an unsuccessful effort to get his straight answer, Kimmel closed by turning to puppet theater featuring doll versions of Clifford and Trump.

Daniels has endeavored to tell her side of the story twice before this: once in 2011 and once again during Trump’s 2016 presidential campaign. Another adult film star claimed that Trump once offered her $10,000 for sex, an account a Trump spokesperson disputed.

Kimmel has emerged as a potent spokesperson for Trump’s critics on late night, taking every opportunity to lay into POTUS, and Tuesday was no exception. 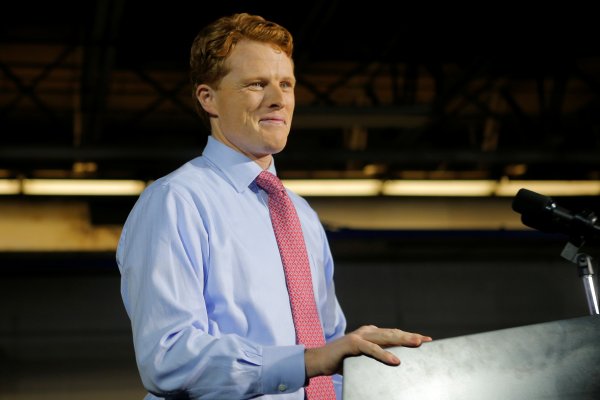 'Out of Many, One.' The Democrats Had 5 Very Different Rebuttals for Donald Trump's State of the Union
Next Up: Editor's Pick