SAN ANTONIO, TX - MARCH 19: Head Coach Gregg Popovich talks with LaMarcus Aldridge #12 of the San Antonio Spurs during the game against the Sacramento Kings on March 19, 2017 at the AT&T Center in San Antonio, Texas. Copyright 2017 NBAE (Photos by Darren Carroll/NBAE via Getty Images)
Darren Carroll—NBAE/Getty Images
Ideas
By Daniel Coyle
Coyle is the author of The Culture Code: The Secrets of Highly Successful Groups.

Down deep, every organization faces the same thorny problem: How do you get a bunch of individuals to combine into a single, selfless entity? How do you create buy-in, trust and cooperation?

Few organizations on the planet have solved that problem better than the San Antonio Spurs. Over the past two decades they have achieved at a celestial level: five championships, .713 winning percentage and 20 consecutive winning seasons. Which makes the Spurs (sorry, Patriots fans) America’s most successful sports franchise.

It also raises a question: What’s the secret to their winning culture? To find the answer, you have to go inside their practice.

On the day I visited, the mood was tense. The night before, the Spurs had lost to their archrival Oklahoma City Thunder. There was a tightness in the air, a quiet tension. Then coach Gregg Popovich walked into the gym.

In an age when many coaches favor a softer, gentler approach to leadership, Popovich is famous for his blunt, intense style. Some of his more memorable tirades are collected on YouTube, under titles such as “Popovich Yells and Destroys Thiago Splitter,” “Popovich Tells Danny Green to Shut the F— Up” and “Popovich Furious at Tony Parker.”

But Popovich wasn’t yelling now. He was walking around, wearing a misshapen T-shirt from Jordan’s Snack Bar in Ellsworth, Maine, and shorts a couple sizes too big. His hair was spare and frizzy, and he was carrying a paper plate with fruit and a plastic fork, his face set in a lopsided grin. He looked less like a commanding general than a friendly uncle at a picnic. Then he set down his plate and began to move around the gym, talking to players. He touched them on the elbow, the shoulder, the arm. He chatted in several languages. (The Spurs include players from five countries.) He laughed. His eyes were bright, knowing, active.

When Popovich wanted to connect with a player, he moved in tight enough that their noses nearly touched. As warm-ups continued, he kept roving, connecting. A former player walked up, and Popovich beamed, his face lighting up in a toothy grin. They talked for five minutes, catching up on life, kids and teammates. “Love you, brother,” Popovich said as they parted.

“A lot of coaches can yell or be nice, but what Pop does is different,” said assistant coach Chip Engelland. “He delivers two things over and over: he’ll tell you the truth, with no BS, and then he’ll love you to death.”

A few minutes earlier, Popovich had delivered another signal. It happened when the team gathered in the video room, expecting to review the Oklahoma City loss. But when the lights dimmed, the screen flickered with a CNN documentary on the 50th anniversary of the Voting Rights Act. The team watched in silence as the story unfolded: Martin Luther King, Jr., Lyndon Johnson and the Selma marches. When it was over, Popovich asked questions. He always asks questions, and those questions are always the same: personal, direct, focused on drawing a connection between the historical moment and the individual players. What did you think of it? What would you have done in that situation?

“It’s so easy to be insulated when you’re a professional athlete,” said general manager R.C. Buford. “Pop uses these moments to connect us. He loves that we come from so many different places. That could pull us apart, but he makes sure that it makes us feel connected and engaged to something bigger.”

The other form of connection on the Spurs happens around meals. Popovich is obsessed with food and wine. His obsession can be measured in a number of ways: the size of his home wine cellar, his part ownership of an Oregon vineyard and the constant presence of the Food Network on his office television. But most of all it can be measured in the way he uses food and wine as a bridge to build relationships.

“Food and wine aren’t just food and wine,” Buford said. “They’re his vehicle to make and sustain a connection, and Pop is really intentional about making that connection happen.”

The Spurs eat together approximately as often as they play basketball together. First there are the team dinners, regular gatherings of all the players. Then there are smaller group dinners, handfuls of players getting together. Then there are the coaches’ dinners, which happen every night on the road before a game. Popovich plans them, picking the restaurants, sometimes two a night, to explore. These are not meals to be eaten and forgotten. At the end of the season, each coach gets a leather-bound keepsake book containing the menus and wine labels from every dinner.

“You’ll be sitting on the plane, and all of a sudden a magazine lands on your lap, and you look up and it’s Pop,” says Sean Marks, a former Spurs assistant coach who’s now general manager of the Brooklyn Nets. “He’s circled some article about your hometown and wants to know if it’s accurate, and where you like eat, and what kind of wine you like to drink. And pretty soon he’s suggesting places where you ought to eat, and he’s making reservations for you and your wife or girlfriend. Then you go, and he wants to know all about it, what wine you had, what you ordered and then there’s another place to go. That’s how it starts. And it never ends.”

A few years back a team of psychologists from Stanford, Yale and Columbia discovered that one particular form of teacher feedback boosted student effort and performance so immensely that they deemed it “magical feedback.” The feedback was not complicated. In fact, it consisted of one simple phrase.

I’m giving you these comments because I have very high expectations and I know that you can reach them.

That’s it. Just 19 words. None of these words contain any information on how to improve. Yet they are powerful because they deliver a cultural signal:

Alone, each of these signals would have a limited effect. But together they create a steady stream of magical feedback. For the Spurs, every dinner, every elbow touch, every impromptu seminar on politics and history adds up to build and reinforce a narrative: You are part of this group. This group is special. I believe you can meet our high standards.

Correction: The original photo on this story featured LeBron James, misidentified in the caption as LaMarcus Aldridge. 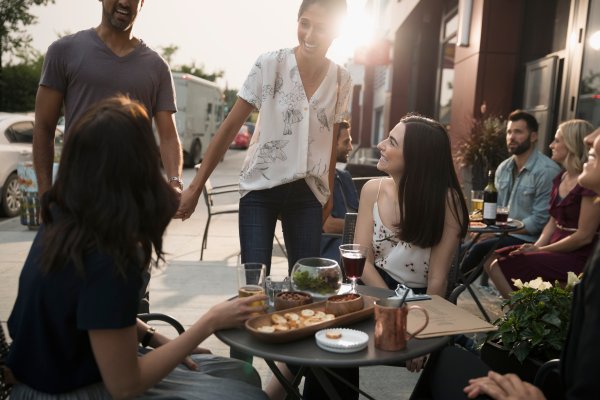 You’re More Likely to Trust a Stranger if They Look Like an Old Friend
Next Up: Editor's Pick