CIA director Mike Pompeo warned that Russia will likely target the U.S. midterm elections later this year in an interview with the BBC.

Speaking with the BBC’s Gordon Corera at the CIA’s headquarters in Langley, Virginia, Pompeo said he has “every expectation” that Russia will attempt to disrupt the U.S. midterms in November. He said that Russian intelligence agencies have continued in their attempts at subversion in Europe and the U.S., according to the BBC.

“The Russians have been at this a long time, and I fully expect they’ll continue to be at it,” said Pompeo, referring to Russian disinformation campaigns. But Pompeo added that he was “confident” that the midterm would not be compromised by Russian interference, and would be “free and fair.”

“We will push back in a way that is sufficiently robust, that the impact they have on our election won’t be great,” he said. A former congressman from Kansas, Pompeo was sworn in as President Donald Trump’s CIA director last January.

Concern over Russia’s role in the 2016 presidential election, believed to have extended to voter database hacking, has triggered investigations by special counsel Robert Mueller and various congressional committees that have hung over the first year of Trump’s presidency.

Pompeo also referenced the security threat posed by North Korea and its leader Kim Jong Un, predicting that Kim would be capable of targeting the U.S. with nuclear weapons “in a matter of a handful of months.” North Korea tested its most powerful intercontinental ballistic missile yet in November, which North Korean state media boasted put the entire continental U.S. in range. Experts have questioned whether North Korea’s missiles are capable of surviving atmospheric reentry to be able to deliver a nuclear warhead. 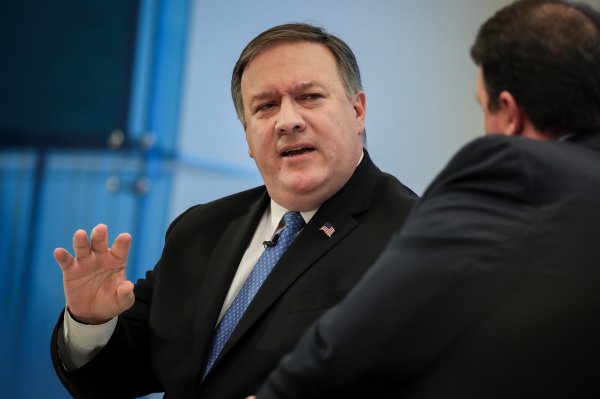 Donald Trump Once Claimed He Doesn't Need Daily Briefings. Here's How He Gets Them Now
Next Up: Editor's Pick