The digital sixth sense is one in which our smartphones and tablets unleash various actions triggered by CPUs, wireless radios and sensors — magically delivering all types of info, feedback and content to enhance our digital lifestyles.

Many of the leading tech companies like Qualcomm, Intel, ARM, Apple, Samsung, Microsoft and dozens others believe our mobile devices will serve as powerful tools that interact with our TVs, refrigerators, homes, automobiles and just about anything that can be made smart via these technologies. These enhancements will, in turn, be used to give us this digital sixth sense.

The term “digital sixth sense” has been tossed around in the industry for decades: I used it in a speech to 500 tech execs in 1995 at the Agenda conference when I described my vision of a connected refrigerator. This connected refrigerator would scan our products as we put them in, and extract information from the refrigerator’s built-in database as they were used. Any time you were almost out of a product, it could be automatically put on a digital shopping list that was sent to an online grocery store for home delivery. I knew at the time that I was way ahead of the curve with this prediction, but I felt pretty sure that we were eventually going to move to a digitally connected world in the not too distant future. Little did I know that it would take almost 20 more years to even get this type of vision really moving forward.

Although the digital sixth sense idea has been around for a while, the leadership at Qualcomm has made it part of their rallying cry, and have been working very hard to create the CPUs, wireless radios and sensors to actually make this happen. The company has been creating complimentary products such as AllJoyn to help enable device-to-device communication in the home, using the smartphone as a hub to send and receive data between devices as part of a digital sixth sense vision.

My connected refrigerator vision in 1995 made the fridge a digital island unto itself. However, in our connected world as envisioned by many industry companies today, all devices should be able to talk, interact and through various means, communicate with each other and our mobile devices to deliver to us this digital sixth sense experience. A good example of this would be when a person walks into their home, their smartphone would “sense” all the other connected devices, and these devices would know that this smartphone has entered the home. This would trigger the lights to turn on, the thermostat to move to the optimal temperature, the house alarm to turn off, and the home owner’s favorite music or TV show to start playing.

Technically, the digital sixth sense fits under the broader theme of the Internet of Things, which basically says that anything that can utilize a CPU, wireless radio or sensors could be made “smart,” either connecting to similar things or the cloud to deliver all types of digital functionally.

I recently spoke with Intel CEO Brian Krzanich at Intel headquarters about his vision of the Internet of Things (IOT) and the idea that CPUs, wireless radios and sensors are an important part of any digital sixth sense vision. He told me that “creating technologies for mobile devices and products for IOT are a top priority for Intel.” Indeed, in various sessions at a recent Intel analysts day, we were shown how Intel plans to be very aggressive in creating low-power processors and integrating wireless radios into new system-on-a-chip (SOC) designs, working with their customers to make all types of mobile products that help connect one’s life to the digital world in new ways.

Of course, for any real connected world or digital sixth sense vision to become reality, there needs to be much more than CPUs, wireless radios and sensors. The industry itself needs to work more closely together to create next generation wireless communications standards so that connected devices from Apple or Samsung work well with appliances in your home, the system in your car and the devices in your office. At the moment, many appliances only speak to their own kind or to the cloud directly — not to other devices in the home or to our mobile devices. In a perfect digital sixth sense world, all devices work together via industry-standard protocols so that no appliance or connected device is kept out of the digital discussion.

So, how close are we to actually seeing this digital sixth sense vision become a reality? Qualcomm and Intel are in a strong position to create the kinds of technologies that drive this concept forward at the hardware level. At the moment, Qualcomm has the greatest amount of intellectual property in the ARM processor camp to enable its vision of a digital sixth sense with its own clients. However, I would never count Intel out of being able to deliver similar hardware to its clients, enabling it to eventually deliver an x86 version of its digital sixth sense vision.

Apple, Microsoft , Samsung (by way of Google) are the big players who could try and keep any digital sixth sense vision within their own software and hardware camps — a move that would keep any cross platform, cross device ideas from ever realizing their full potential. I just hope that all of the folks working on this important IOT and digital sixth sense vision find a way to make all of their devices and software work together seamlessly.

If they do, the realization of a broad, interconnected, digital sixth sense-enabled could be only about three to five years away. If not, it could take another six to eight years to flesh this out before mobile technology truly unlocks our digital sixth sense. 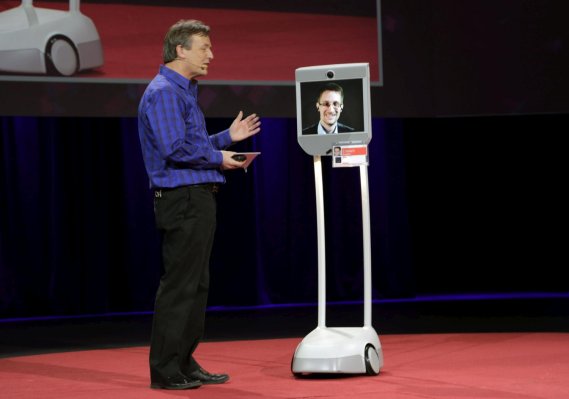 Why TED Matters
Next Up: Editor's Pick