Punxsutawney Phil Just Emerged for Groundhog Day. Find Out When Spring Is Coming

Bad news for warm-weather fans: beloved groundhog Punxsutawney Phil has seen his shadow, therefore predicting that winter will stick around for another six weeks in 2018.

The famously prophetic creature emerged from his den early Friday morning, this year’s Groundhog Day, with his behavior indicating a seasonal change soon to come.

Most of the year, Phil lives an unbothered life in his home town of Punxsutawney, Pa., secure in an enclosure at the town library and cared for by a special group of Groundhog Club members called the Inner Circle, known for their tuxedo uniforms and top hats. But once a year on Groundhog Day — for 132 years now — Phil is transported to a den at Gobbler’s Knob, where crowds of thousands descend upon the area at sunrise to see what he foretells for the season ahead.

As the Groundhog Day website notes, there’s a bit more to the tradition than you might think.

“After Phil emerges from his burrow on February 2, he speaks to the Groundhog Club president in ‘Groundhogese'(a language only understood by the current president of the Inner Circle). His proclamation is then translated for the world,” the site explains. They claim that Phil has always been 100% accurate in his predictions, while some fact check sites suggest his calls of a “long winter” or “early spring” map out to about a 39% accuracy rate.

The first Groundhog Day dates back to the 1800s, when early settlers in Pennsylvania began celebrating the occasion. Gobbler’s Knob became the home site of the event in 1887. On most years, Phil has predicted that winter will last longer. 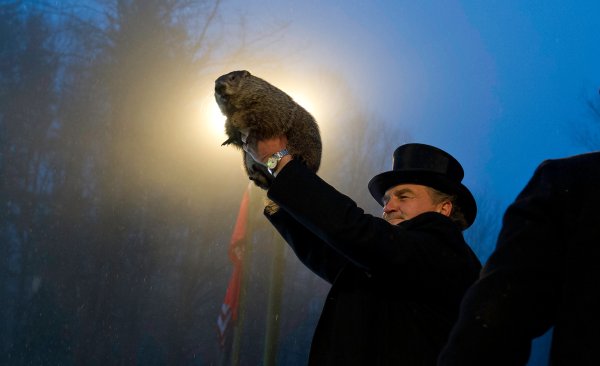 Punxsutawney Phil Is About to Make His 2018 Groundhog Day Prediction. Watch It Live
Next Up: Editor's Pick