At least 11 Democratic lawmakers are boycotting the Capitol Tuesday night where President Donald Trump will give his first State of the Union address.

That’s fewer than the 60 lawmakers who boycotted President Trump’s inauguration, but it’s not an insignificant number as the president makes a major address on his policy goals.

Many of the Democrats boycotting Trump’s State of the Union address cited the president’s recent rhetoric about people of color and the perceived racism of his Administration as their reason for skipping the speech.

Illinois Rep. Bobby Rush said in a statement Monday that he refuses to “participate in pomp and circumstance” that normalizes Trump’s “egregious and hateful” behavior. “This is a presidency that has been built on racism, stupidity, and lies, which has already wasted enough of America’s time and I will not waste any more of mine,” Rush said.

Two additional Illinois lawmakers will be boycotting Trump’s speech today, including Reps. Jan Schakowsky and Danny Davis. According to the Chicago Sun-Times, Davis will be in Chicago during the State of the Union address and will watch his colleague Rep. Joseph Kennedy III deliver the official Democratic response.

Other lawmakers boycotting Trump’s State of the Union Tuesday night include:

A number of the boycotting Democrats are members of the Congressional Black Caucus, a group that expressed outrage over the president’s alleged “shithole countries” remark about African nations and Haiti. (The Caucus’s chairman, Louisiana Rep. Cedric Richmond, introduced a resolution to censure President Trump over the remarks earlier in January.) In the wake of those remarks, civil rights icon Rep. John Lewis was among the first Democratic lawmakers who said they would not be attending the State of the Union address.

Jayapal followed suit saying “with all the racism and hatred coming out of this White House, I will NOT be attending Donald Trump’s State of the Union address” over Martin Luther King Jr. weekend. Sires said it was “disgusting that the President of the United States has no regard for American values or the immigrant experience” when he announced his boycott of the address on Twitter.

Waters has been an outspoken critic of President Trump throughout his administration and did not attend Trump’s inauguration or his first address to a joint session of Congress last year. “Why would I take my time to go and sit and listen to a liar,” she said in an interview on MSNBC. “What does he have to say that I would be interested in?”

The California Democrat and card-carrying member of the so-called resistance will deliver her own response to Trump’s address on the BET program, “Angela Rye’s State of the Union.” 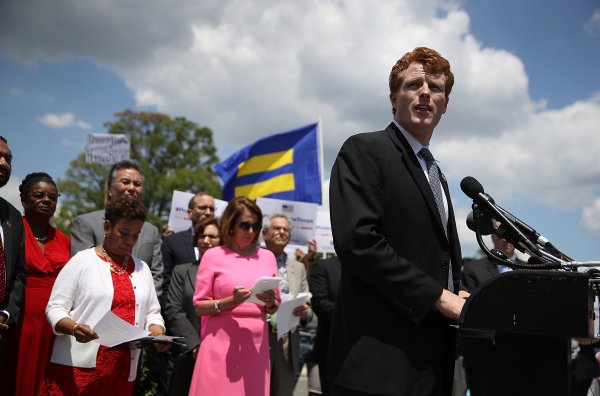 Rising Star to Give Democratic Response to Trump's State of the Union
Next Up: Editor's Pick