Rihanna Shared the Sweetest Moment with Pink's Daughter at the Grammys

It’s official: Pink is a world-class mom. At the 60th Annual Grammy Awards, the singer — who was nominated for Best Pop Solo Performance for her single off of Beautiful Trauma — brought along her six-year-old daughter Willow to the big night. (Already, that’s a hot ticket that Willow was able to snag thanks to her mom’s star status.) But to complete the special night, Pink made magic happen: she introduced her daughter to none other than Rihanna.

“Dreams come true. My daughter lives for this woman. So do I,” the “What About Us” singer captioned a snap of Willow, embraced by a smiling Rihanna backstage at Madison Square Garden. She also shared further photos of her performance of “Wild Hearts Can’t Be Broken” and some family photos.

Looks like the feeling was mutual: in another picture shared by her husband Carey Hart, the three ladies can be seen deep in conversation. Even though Pink ultimately did not take home a Grammy, Hart thinks she still won the night. “But, she made the night VERY memorable for Willz!” he wrote. “Major mom points tonight.” And even Pink seems to be responding with only positivity. “I lost my 19th Grammy nomination, I consoled another talented loser, whom I love, and I kept my feet on the ground,” she noted on another photo. “Y’all I’m so proud of myself I’m gonna buy myself a drink tonight.”

At last year’s MTV Video Music Awards, Pink also shared a memorable moment with her daughter when she spoke about the importance of body positivity and self-acceptance after receiving her Video Vanguard Award. 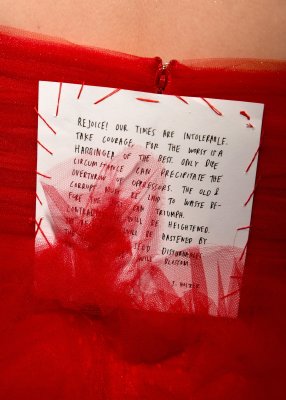 Lorde Made a Sneaky But Powerful Statement With Her Grammys Outfit Without Saying a Word
Next Up: Editor's Pick