Kendrick Lamar made a special shoutout to Jay-Z during his acceptance speech for Best Rap Album at the 60th Annual Grammy Awards.

Before walking offstage, Lamar concluded his Grammy acceptance speech by saying, “Jay for President.” Lamar beat out Jay-Z as well as Tyler, the Creator, Migos and Rapsody in the Best Rap Album category. Lamar also honored Jay-Z in another part of his speech: “I got a lot of guys in this building right now that I still idolize to this day: Jay-Z, Nas, Puff.”

Lamar’s praise of Jay-Z is especially relevant at this moment. The rapper and music mogul was honored at the Clive Davis Pre-Grammy Gala in New York on Saturday night where he received the 2018 Salute to Industry Icons Award. During his acceptance speech, Jay-Z called his wife Beyoncé the “First Lady of Music.”

Jay-Z also made news this weekend after calling out President Donald Trump during an interview on CNN’s “The Van Jones Show.” The rapper and Jones discussed unemployment rates among black Americans, to which Jay-Z said, “Money doesn’t equate to happiness. It doesn’t. That’s missing the whole point.”

President Trump later responded to the interview on Twitter:

See who else won big on music’s biggest night with this list of 2018 Grammy winners. 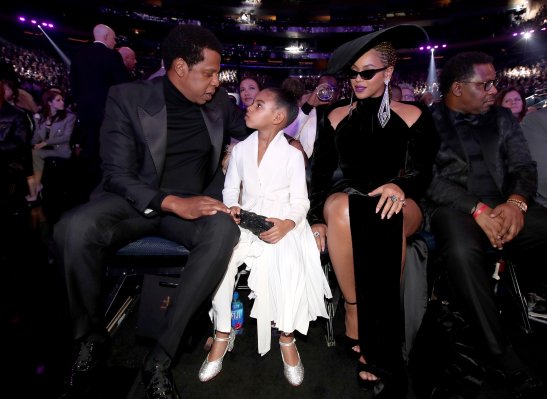 Beyoncé and Blue Ivy Graced the Grammys with Their Presence
Next Up: Editor's Pick