The late Carrie Fisher has been honored with a Grammy Award.

At the 60th annual ceremony Sunday in New York, Fisher posthumously won the prize for for best spoken word album for her audiobook recording of The Princess Diarist, a memoir culled from her diaries during her time shooting the first Star Wars film and portraying Princess Leia.

The memoir was published just five weeks before her death in December 2016 and made headlines for the details it revealed, including an on-set affair with costar Harrison Ford. Fisher was returning from a European leg of a book tour for the memoir when she suffered a heart attack on a flight home to Los Angeles; she died days later.

Fisher beat out several other big names in her category: Neil deGrasse Tyson for Astrophysics For People in a Hurry, Bruce Springsteen for Born to Run, Shelly Peiken for Confessions of a Serial Songwriter, and Bernie Sanders and Mark Ruffalo for Our Revolution: A Future to Believe In.

The actress and writer has been up for several posthumous awards since her death, including an Emmy nomination for outstanding guest actress in a comedy series for Catastrophe. The Grammy marks her first posthumous win.

Fisher was previously nominated for a Grammy in the same category in 2009, for her recording of her memoir-turned-one-woman-show Wishful Drinking, but did not win.

The award was announced during the Grammys’ preshow ceremony. See more winners here. 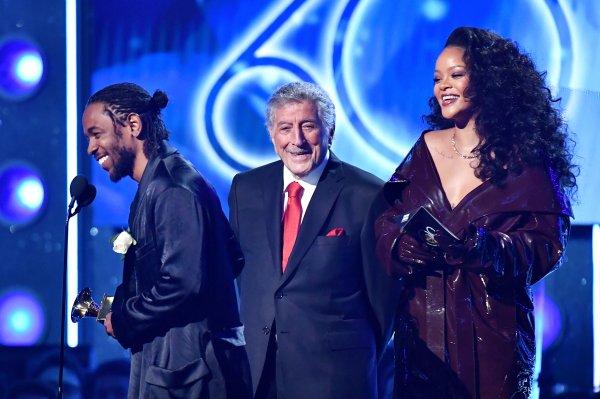 Grammys 2018: See the Full List of Winners
Next Up: Editor's Pick