By Jennifer Calfas and Alana Abramson

A spokesperson for Handel told TIME that Handel donated the $2,700 this weekend to a Georgia nonprofit organization that helps victims of domestic violence and sexual abuse.

The decision comes after Wynn stepped down from his position at the RNC following a report from the Wall Street Journal that detailed numerous allegations of sexual misconduct from dozens of people over decades. Wynn has denied the allegations.

Wynn, who until Saturday was the finance chair of the RNC, donated over $65,000 to the RNC in 2017, according to documents from the Federal Election Commission. He also donated $100,000 to the National Republican Senatorial Committee, and thousands to the campaigns of Sens. Jeff Flake and Dean Heller, as well as Congressman Greg Gianforte and Handel. Representatives for Flake, Heller, Gianforte and the NRSC did not respond to comment. The RNC did not respond to an immediate request for comment.

In interviews Sunday morning, Republican Sens. Susan Collins of Maine and Lindsey Graham of South Carolina, called on the RNC to donate or return the funds Wynn had contributed to the committee.

“If they’ve accepted contributions recently from him that have not been spent, absolutely, I don’t even think it’s a close call to return the money,” Collins said on CNN’s State of the Union.

In October, investigations from the New York Times and The New Yorker exposed Hollywood producer Harvey Weinstein’s decades of systematic sexual assault and abuse toward women in the industry. In the aftermath of those allegations, a number of Democratic lawmakers returned their donations from Weinstein. Those lawmakers included a number of senators, as well as 2016 Democratic presidential nominee Hillary Clinton. At the time, Republicans called on Democrats to donate Weinstein’s contributions.

“We should do of ourselves what we ask of the Democratic Party if these allegations have merit,” Graham said on ABC’s This Week Sunday morning. “I don’t think we should have a double standard for ourselves.” 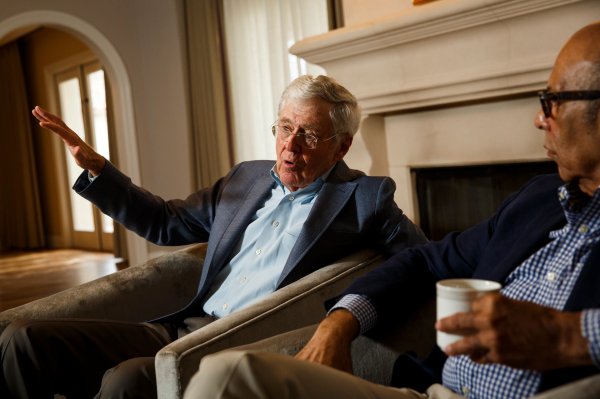 The Koch Brothers Plan to Spend a Record-Setting $400 Million
Next Up: Editor's Pick