The U.S. Olympic Committee, which oversees the various national sports governing bodies, threatened to terminate USA Gymnastics’ status if the entire board does not resign in six days.

USOC CEO Scott Blackmun had already called for the remaining 18 members of the USA Gymnastics board to resign, but in the email laid out detailed conditions the USOC has for allowing USA Gymnastics to remain the sport’s national governing body.

On January 22, the three leaders of the USA Gymnastics board resigned, after dozens of women testified about sexual abuse they experienced by the national team doctor Larry Nassar. Olympians Aly Raisman and Jordyn Wieber appeared in the Michigan court as well to detail sexual abuse they suffered at national training camps and international competitions. Their teammates Simone Biles, Gabby Douglas, McKayla Maroney and national team member Maggie Nichols have also revealed they were abused by Nassar.

The USOC ultimatum came a day after Nassar was sentenced to up to 175 years in prison in Michigan for criminal sexual conduct.

An interim board must be appointed by February 28. None of the existing board members may serve on the interim board (except for the five athlete representatives) or rejoin the new board. USA Gymnastics must also cooperate with an independent investigation into how Nassar was allowed to continue abusing young girls while in his position as national team doctor.

The USOC also called for all USA Gymnastics members to take part in SafeSport training within three months.

The threat of termination was prompted by more than 150 women coming forward detailing not only sexual abuse by Nassar but also, in many cases, lack of timely and appropriate action by USA Gymnastics in reporting the abuse to the proper authorities. Nassar was removed from USA Gymnastics in 2016 but it was not until his victims began revealing the abuse at his sentencing hearing last week that USA Gymnastics took actions that many of the gymnasts, including Raisman and Biles, were calling for over the past year — such as replacing the board and closing the national training center at the Karolyi ranch where much of the abuse occurred. 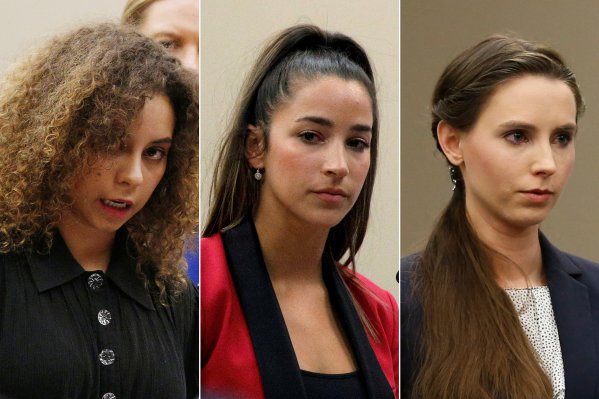 The Women Who Were Abused By Larry Nassar Aren’t Done Sharing Their Stories
Next Up: Editor's Pick