President Donald Trump wants a wall to secure the southern border of the United States, and he’ll propose $25 billion for building a wall on the U.S.-Mexico border. Luckily, Jimmy Kimmel may have found a solution.

As budget negotiations continue in Congress, Trump tweeted at Democratic Senator Chuck Schumer that there would be no deal to extend DACA, the Obama-era Deferred Action for Childhood Arrivals program, without including funding for his border wall.

“Cryin’ Chuck Schumer fully understands, especially after his humiliating defeat, that if there is no Wall, there is no DACA. We must have safety and security, together with a strong Military, for our great people!” Trump tweeted.

“So in other words, if Congress doesn’t pay for the wall, people who came to this country as children 30 years ago will be separated from their families and deported,” Kimmel said on Wednesday night’s episode of Jimmy Kimmel Live!

“Oh, you want support for DACA? Okay, then give me $18 billion for the world’s dumbest wall,” said Kimmel. The late-night host then suggested a less expensive option: “Honestly, it would be cheaper for everyone if we just paid Trump off,” he joked. “Instead of $18 billion for a wall, how about we give you $5 billion to shut up and go back to Florida?”

He then proposed an alternative solution: a shopping mall, on the wall. 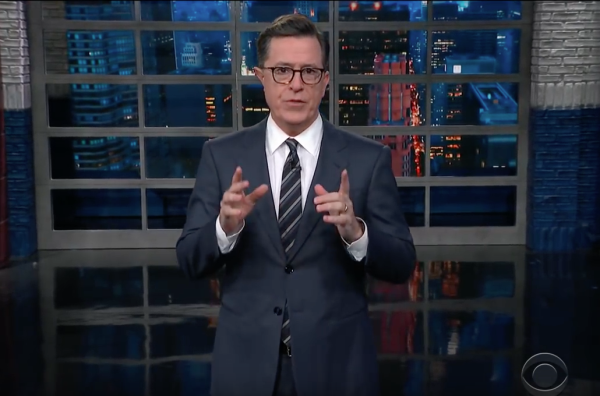 Stephen Colbert Trolls Trump With An Emmanuel Macron Impression in Honor of Davos
Next Up: Editor's Pick