America and Americans are many things, but I was reminded of how simultaneously bewildering, charming, generous and scary this place can be while watching a new documentary called This Is Home, about four Syrian refugee families who relocated to Baltimore just months before Donald Trump was sworn into office. The film premiered at Sundance this year, and I think its gentle humor may have surprised those who were expecting a grim refugee tale.

In one scene, Mohammed, a Syrian dad, is learning how to shop for groceries with a kind and enthusiastic worker from the International Rescue Committee (IRC), a nonprofit charged with getting the families settled. She takes him to a massive wall of milk containers–in other words, a typical American dairy section. They stand in front of this monument to choice, with a translator on speakerphone, and the guide starts going through all the kinds of milk, from skim to whole fat, 1%, 2%, with and without lactose–the explanation goes on and on in Arabic and English. The look on the father’s face is somewhere between confusion and panic. (And she didn’t even get into almond milk and flavored creamers.)

Finally, he shakes his head and tells the translator that what he was actually asking for was yogurt, not milk. Off they go to that section and another giant wall of choice. It’s amazing. And funny. And poignant when you remember that the man is coming from years spent in a refugee camp, severed from his country because it’s been blown to bits.

As the title suggests, This Is Home is about making a new home, not by choice but by tragedy. For the four families, adapting to life in the U.S. is complicated by rising Islamophobia and the ongoing political battle over accepting families like them. But the heart of the story isn’t political. It’s about survival and belonging–the most essential of human needs.

These families have eight months from the day they arrive to become self-sufficient. After that, the financial and other aid they get from the IRC and the state is dramatically reduced. Everything seems impossible and accelerated, the most brutal reality show. They have to learn how to speak English, how to enroll kids in school and get them to the right bus, how to find a job and how to shake hands because, as one IRC staffer tries to explain, Americans always want to shake hands.

Another of the Syrian dads, Khaldoun, a big man with a big sense of humor, moved to Baltimore with his wife Yasmen and their four children. He is clearly grateful to be alive, but he grieves for his old life. “I am Syria,” he says at one point, struggling with English and intending to say he’s from Syria. He sobs as he explains how he misses that home–its food, its smells, its earth. His is a universal pain, one that we’ve all felt in some form. As Maya Angelou wrote, “The ache for home lives in all of us, the safe place where we can go as we are and not be questioned.” For these families, that safe place doesn’t exist anymore. They will have to re-create it in a country where they fear they’re not wanted.

Those fears are well-founded. The U.S. has all but closed its doors to refugees, citing terrorism risks. At the same time, compassion fatigue is becoming an issue. There are just so many refugee stories. The global population of people who’ve been forced from their homes topped 65 million in 2016, according to the U.N. All of that just intensifies the pressure on newcomers to fit in, especially women like Mahida, one of the film’s moms. After being harassed, she fashions a hijab from a scarf of the American flag. It’s a cultural compromise, or perhaps an olive branch.

Mahida is met more than halfway by an American friend who invites her to cook Syrian food for a church supper. More than 100 people show up. The Syrians mingle, answer questions about the meal, point out their hometowns on maps. For one night they are celebrities. And in a moment that should make even Jeff Sessions tear up, some of the kids get up after supper to say thank you to a beaming crowd on behalf of their families. They read haltingly from notes, but their English is already better than their parents’. Within months, the youngest will barely remember Syria. Watching them adapt so quickly is kind of thrilling. When all four families were flown to the premiere in Utah with director Alexandra Shiva, the kids couldn’t wait to join her onstage. The oldest boy arrived in a hipster knit hat, and one little girl was decked out in bright pink sparkle sneakers and a shy grin. They looked right at home up there. 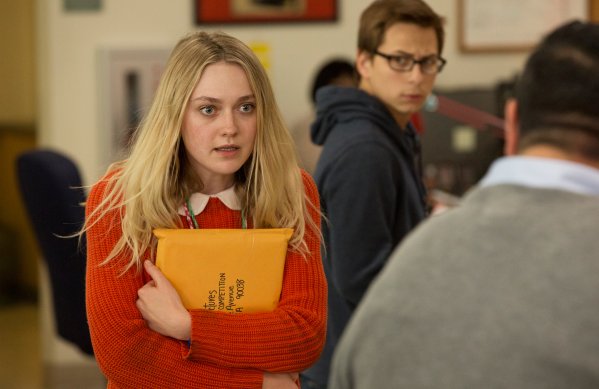 Dakota Fanning Makes the Trek of a Lifetime in Please Stand By
Next Up: Editor's Pick