What the Global Elite Can Learn From Donald Trump

Nestled in the Swiss Alps, Davos (pop. 11,000) was best known as a ski resort until the World Economic Forum made it synonymous with the global elite
Arnd Wiegmann—Reuters
By Richard Haass

Most years, the late-January gathering of the world’s political, business and financial heavyweights in Davos is dominated by an event or individual. In early 2002, it was 9/11 and terrorism. Last year, it was the coming-out party for China’s leader, Xi Jinping, who despite his authoritarian, mercantilist ways, spoke the language of globalization in a bid to supplant the U.S. around the world. This year, President Trump was determined to be the story of Davos 2018. The world’s most prominent populist and his globalist hosts have plenty at stake in whether they can find common ground–we all do. But it will take a big dose of realism on both sides to avoid making things worse.

The Davos crowd sees globalization as a good thing, in no small part because it has been very good to them. With few exceptions, they are highly educated, wealthy, successful and mobile. Their world has been defined much more by opportunity than by threat. But now comes Trump, the veritable Antichrist for much of what they hold sacred. He rejects free trade, opposes immigration, turns back refugees, denies climate change, denounces the Iran nuclear deal, attacks the media and courts, embraces autocrats, demeans women and speaks in a coded language that resonates with racists and ultranationalists.

From his gilded perches up and down the East Coast of the U.S., the 45th President, apostle of “America first,” sees globalization as bad for domestic prosperity and security and a direct threat to Washington’s sovereignty. He genuinely believes that the costs of U.S. leadership far outweigh the benefits.

As he made the pilgrimage to the Alps, Trump, buoyed by a robust economy and soaring stock market, had two options for how to bridge this ideological divide. He and the many Cabinet members in his retinue could reach out to the skeptics to try to convince them that American foreign policy under this President is, as was said about Wagner’s music, not as bad as it sounds, and is more in line with their thinking than they realized. Or Trump could try to win them over, making the case for trade that is narrowly balanced rather than free, calling out China, Russia, North Korea and Iran by name, criticizing America’s allies in Europe and Asia for free-riding on U.S. armed forces, and defending the unilateral American recognition of Jerusalem as Israel’s capital. He could ignore the importance of human rights and freedom and emphasize security over all else when it comes to immigration.

The truth is, neither option has much of a chance of working: the distance between Trump and the globalists is too great. Instead, both sides need to be more realistic. The Davos men and women need to open their minds to the idea that some of what Trump has to say may be right. They need to pay attention to the many people around the world who rightly fear globalization and modernity. Trump is wrong to paint trade and immigration as the culprits, but millions of jobs will disappear in the coming years thanks to new technologies, from robotics to driverless vehicles to artificial intelligence. What new jobs these advances create will require new skills and the training and education to perform them. The Davos globalists may well have to pay higher taxes to help fund needed retraining, transitional economic assistance and better public education. The stakes are high: the populism that, for the moment, is in modest retreat will return with a vengeance if large numbers of people around the world are left behind.

Elites need to get real about how to fix the world. The U.N. will, at best, play the most limited of roles given the revival of great power rivalry and the emergence of dangerous regional states and subnational entities like ISIS. No matter how frequently the phrase international community is mentioned, the reality is that there is little. There is, as well, a need to shift the balance of authority within the E.U. away from Brussels toward member countries so as to give governments greater control over their borders, tighten enforcement of trade pacts, increase spending on defense and do more to meet the existing North Korean nuclear threat and the potential one from Iran.

For his part, Trump needs to understand that globalization is, in many dimensions, not a choice but a reality. The U.S. can, at a significant cost, close its borders to people and trade. But it cannot wall off the country from computer viruses, biological viruses or greenhouse gases and the effects of climate change. Nor can the country be made invulnerable to missiles or terrorists. No one expects Donald Trump to depart Davos a card-carrying globalist, but it would serve him well to return home recognizing that “making America great again” requires that the world not come apart. That can only be avoided if the U.S. shapes the world in partnership with others. 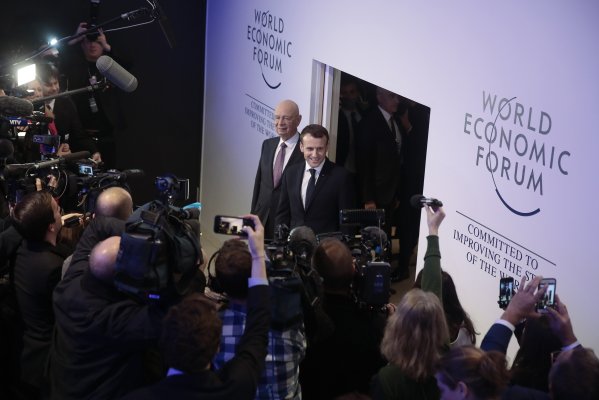