A British charity that ran a men-only, black-tie fundraiser shut down following a report that revealed attendees at the club’s annual dinner targeted female hostesses with rampant groping and sexual harassment.

An undercover reporter from the Finanical Times chronicled the events of the fundraising dinner, where she worked as one of 130 hostesses hired for the event put on by The Presidents Club Charitable Trust. The massive report sparked controversy, with the club shutting down in the 24 hours after it was published and being denounced by charities and politicians supported by the club.

David Meller, the chairman of the club, also stepped down from his position in the U.K.’s Department of Education following the event.

Representatives from the charity said it donated the rest of its funds to several children’s charities, FT reported.

The club — which included British politicians, businessmen and financiers — had put on the fundraising dinner at London’s Dorchester Hotel for 33 years.

During this year’s six-hour event, “many of the hostesses were subjected to groping, lewd comments and repeated requests to join diners in bedrooms elsewhere in the Dorchester,” FT reported. Hostesses said men’s hands were up their skirts and, in one case, an attendee allegedly exposed himself to one of the hostesses, the report said.

The women, who were hired if they fit the description of “tall, thin and pretty,” were instructed to wear “BLACK sexy shoes” and black underwear. They were provided uniforms: “short tight black dresses” and “a thick black belt resembling a corset,” according to the FT report.

The agency that hired the hostesses told them the men at the event could be “annoying,” the report said. The hostesses were also given non-disclosure agreements to sign when they arrived at the venue.

As for the fundraising itself, the FT reported that auction items included a night at a strip club and a plastic surgery treatment that would “add spice to your wife.”

In the report, representatives from the Dorchester Hotel said they were unaware “of any allegations and should we be contacted we will work with the relevant authorities as necessary.”

The Presidents Club said event organizers were “appalled” by the allegations, and that the event raised “several million pounds for disadvantaged children,” according to FT.

“Such behaviour is totally unacceptable,” the club told FT. “The allegations will be investigated fully and promptly and appropriate action taken.” 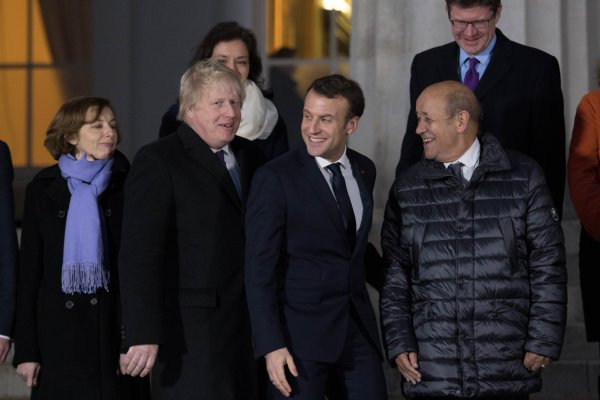 Boris Johnson Wants Bridge Between U.K. and France Post-Brexit
Next Up: Editor's Pick