The San Francisco SPCA announced Friday on Twitter that cases of dog flu had been confirmed in the Bay Area, and encouraged dog owners to contact their veterinarians if their pets display symptoms of the virus. California is one of several states that has reported outbreaks of dog flu, also known as canine influenza, over the past several months.

The Cornell University College of Veterinary Medicine, which monitors reports of dog flu around the country, confirmed that six dogs have tested positive for the canine influenza H3N2 virus in California in the last 45 days. Although there is also an H3N2 strain of human seasonal flu currently affecting people across the country, the virus for dogs is different, and it is extremely rare for dogs to catch the human flu. There’s no evidence that the existing strains of dog flu can be transmitted to humans. (Some experts, however, worry that this could happen in the future.) Eleven dogs have also tested positive in northern Kentucky and southern Ohio.

While only six recent cases in California have been confirmed via blood test, the website SFGate reported earlier this month that one veterinarian in the South Bay had seen “maybe 50 cases” in recent weeks. Another clinic told the website that it had treated 12 cases of dog flu, and that it was closing for the week to disinfect the facility.

Glaser says the California outbreak is typical of what happens when the H3N2 canine influenza virus emerges in a new geographic location. “There tends to be intense local transmission with dozens to hundreds of dogs infected,” she says. “It is common for the virus to move rapidly through a population, whether it is a household with multiple dogs, a kennel, or any other location where dogs co-mingle.”

But recent media reports that dog flu has spread to 46 states may be causing unnecessary alarm across the country, says Michael Topper, president of the American Veterinary Medical Association (AVMA). While dog flu has been reported in most states, he says, that doesn’t mean that there are active outbreaks in all of them, or even that there have been any cases in recent years.

“We mostly see sporadic cases, and occasionally we see an outbreak in specific regions,” says Topper. “Back in 2015, there was a big outbreak involving hundreds of dogs in Chicago and other areas of the Midwest, and last year it was diagnosed in some dogs in the southeast that had attended dog shows.”

Unlike human flu, canine influenza doesn’t follow a seasonal pattern; dogs can get sick and spread the virus year-round. Symptoms of canine and human flu are similar and can include a fever, cough, runny nose, reduced appetite and low energy.

And while pet owners shouldn’t be unnecessarily worried about dog-flu headlines, they should be aware of the signs of dog flu, says Topper—especially if it’s been reported in their area. “It’s transmitted easily from dog to dog, and can happen when dogs are barking, sneezing or even playing with the same toy,” he says.

Most dogs who get canine influenza recover in a few weeks. But, just as with human flu, some dogs experience complications. “Some get a more severe form, with a higher fever and signs of pneumonia,” says Topper. Less than 10% of dogs who become sick with canine influenza die, according to the AVMA, but dogs that are very young, very old or have underlying health conditions are at increased risk.

There is a vaccine available to protect against both known strains of dog flu, H3N2 and H3N8. Topper recommends that anyone whose dogs spend time around other dogs—at dog parks or a boarding facility, for example—talk with their veterinarian about the vaccine. “We consider it a lifestyle vaccine,” he says. “Whether we recommend it or not is all about the dog’s risk of exposure.”

Although people probably don’t need to worry about catching the canine flu, it can, however, infect cats. Cat owners should also be aware of the virus’s symptoms, and should keep their feline friends away from dogs who might be sick. 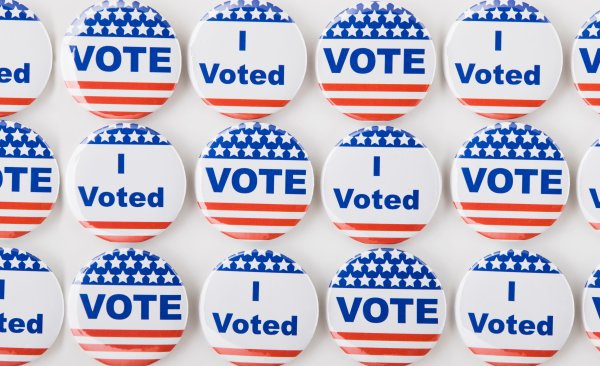 Voting Is Good for Your Health, Study Finds
Next Up: Editor's Pick