My Parents Held Me Captive for 18 Years. This Is How We Can Save Other Kids

Ideas
By Maude Julien
Julien, a psychotherapist, is the author of the memoir The Only Girl in the World.

The world has been shocked to learn of the 13 brothers and sisters in a small Californian town found starving and filthy, several of whom had been chained to their beds, as their own parents allegedly held them captive for years. We have all been haunted by a question: How could such a thing take place in plain sight?

I know how, because it happened to me. From birth to the age of 18, I was held in captivity by my father and deprived of all contact with the outside world. Convinced it was his sacred duty to do so, from the time I was small my father subjected me to endless drills meant to “eliminate weakness,” like holding an electric fence for minutes at a time, sitting in a rat-infested cellar all night and doing manual labor. My mother was his brainwashed subject and instrument of abuse. At 18, I escaped.

While it took me years to break free emotionally, I have since come to see my father for what he was: A predator. An ogre. I have devoted my career as a psychotherapist to understanding the mechanisms behind mental and physical incarcerations, and to helping victims break free from their own ogres.

David and Louise Turpin appeared to be a normal couple that had simply chosen to homeschool their kids. Yet while there are valid reasons to homeschool, it should also be clear that withdrawing one’s children from the school system is a perfect gateway to establishing physical and mental control over them, away from outside interference. The grandparents have spoken of how the children could recite long passages from the Bible — rote memorization being a known tool for preventing original thought, questioning or self-awareness.

The family did everything to come across as normal and happy. Louise Turpin’s sister has said, “We always thought she was living the perfect life.” And even the small town’s police chief appeared baffled: “I wish I could come to you today with information that would explain why this happened”

Yet a neighbor did admit that over a period of two years, she’d only once seen the children, and only three of them. She described them as looking like vampires because they were “really, really pale” and “only came out at night.” Others have said they held their suspicions in check out of a reluctance to make assumptions or to pry.

We don’t want to think ill of others. Unfortunately, this is an all too common reaction to signs of abuse. But as a neighbor, if you suspect that something abnormal is happening, don’t close your eyes; remain vigilant and don’t hesitate to report it to the authorities if something seems strange. It’s often through alerting authorities to these horrors that victims are saved. Interference from the outside is the greatest threat to a predator.

After a piano teacher remarked on the bruises and cuts on my hands, my parents pulled me from my lessons, and I never saw her again. Later on, it was another music teacher who helped me escape from my captivity. This man saw that something was wrong, and unlike other adults I had come into contact with, he decided to do something about it. Too often, you hear stories of people being held prisoner for many years right under the eyes of their neighbors, who were not indifferent but just couldn’t imagine that such terrible things could be happening right in front of them.

The Las Vegas Elvis impersonator in whose presence the Turpins renewed wedding vows three times described the children as “very soft spoken and well-mannered.” He tried to rationalize the news by saying: “I think something recent maybe changed their circumstances, whether medical or related to work. I wouldn’t want to think of the kids suffering that long.” This is another frequent mistake: people cannot or do not want to see that such behavior can exist and, furthermore, that they may have failed to spot it. The truth is that they were blinded by the charm that a predator knows how to wield. A person doesn’t suddenly become a sadistic predator. From very early on, they work to create mechanisms of seduction to use upon potential witnesses and mind-control techniques for their victims.

The Turpin children have been under the control of an ogre (or two) for a very long time. Unlike children who have learned models of conflict and rebellion, and who can imagine how to fight back, a child who has only known submission in a restricted world feels unable to act. They have no existence of their own and thus can be chained up and mistreated without rebelling. They appear to be soft-spoken and well mannered, while within they are experiencing psychic torture and disfigurement. The child who raised the alarm must be praised for her courage. It’s truly remarkable for a young woman to have suffered years of torture yet find the strength to confront her parents’ control and save her siblings.

I know from both my personal and professional experience that recovery from such torments is a life-long endeavor. These children have years of physical and psychological reconstruction ahead of them. In captivity, my saving graces were the companionship of animals and the solace of music and novels. In the decades since my escape, I have come to rely on the kindness of people I trust. And we must do our best to ensure that these children will also now find a benevolent community that will help them rebuild their identities and protect those like them. 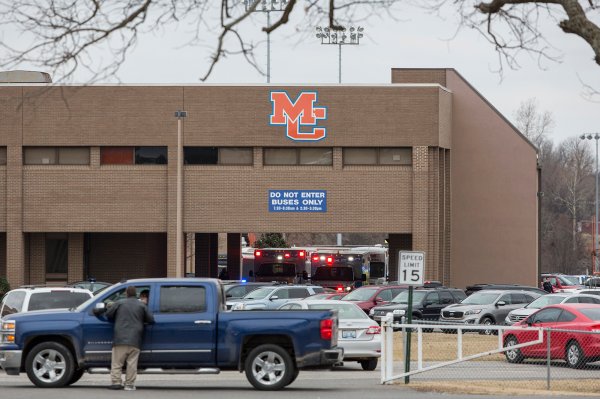 2 Dead, 17 Injured: What to Know About the Marshall County High School Shooting
Next Up: Editor's Pick