Millions of women took to the streets on Saturday to march and President Donald Trump couldn’t help but notice.

The president sent out a tweet acknowledging the demonstrations and appearing to suggest that the women were out to celebrate the economic gains made during his first year in office. That assessment of the Women’s March gave Jimmy Kimmel pause, calling Trump’s response “perhaps his most breathtaking tweet of all time.”

“Boy, he’s really bad at reading women,” said Kimmel on Monday night’s episode of Jimmy Kimmel Live! “Only Donald Trump could find a way to make a protest that’s about him even more about him.”

The 2018 Women’s March took place across the globe, as women and their allies hit the streets on the anniversary of Trump’s inauguration. As Kimmel noted, “One thing you can say, Donald Trump got more women to exercise than Michelle Obama ever did.” Marchers were there not only to protest Trump’s policies but in support of the #MeToo movement against sexual assault and harassment, and to register people to vote in the upcoming election. “It was truly a moving and inspirational weekend for American women,” Kimmel said, “and the poster board aisle at Office Max.”

To prove his point, Kimmel highlighted some of his favorite signs that marchers held during the protests on Saturday, including ones featuring Trump that read “Miss Ogyny” and “Veto the Cheeto.” 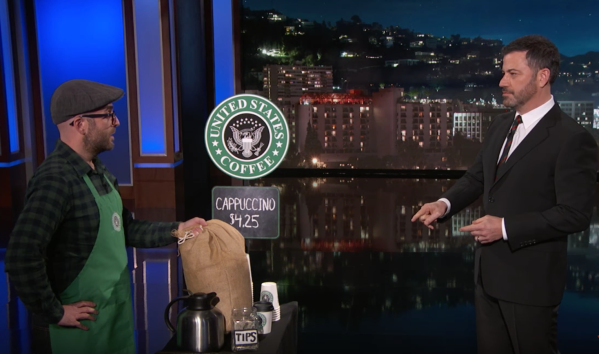 Jimmy Kimmel Has a Brand New Method for Making His Health Care Case
Next Up: Editor's Pick