Drone company DJI unveiled Tuesday a new foldable, portable drone called the Mavic Air. The Mavic Air, which sits in the company’s lineup between the entry-level DJI Spark and prosumer Mavic Pro series, will begin shipping on Jan. 28 for $799.

The Mavic Air packs a 1/2.3″ CMOS sensor and an f/2.8 aperture lens capable of capturing 12-megapixel still photos. Whereas the Spark’s video abilities are more limited, the DJI Mavic Air can capture 4K video at 30 frames per second, making it a more viable choice for people who want to record top-quality footage.

At just 430 grams, the Mavic Air is also significantly lighter than the Mavic Pro, which weighs 734 grams fully-loaded. Meanwhile, it’s the company’s first drone to include a microSD card slot as well as 8GB of onboard storage, meaning users can save photos and videos directly to the aircraft if they don’t have a memory card. (Though 8GB won’t be enough for a great deal of 4K footage.)

The DJI Mavic Air also has some new photography features, like the Sphere mode, which automatically shoots and stitches together 25 photos to create a 32-megapixel panoramic image. Users can alsocontrol the drone via hand gestures thanks to its SmartCapture capability, which makes it possible to tell the Mavic Air to take a photograph, follow a subject, and launch or land among other tasks with hand motions. The drone also includes an improved version of DJI’s ActiveTrack feature that can detect multiple subjects simultaneously. 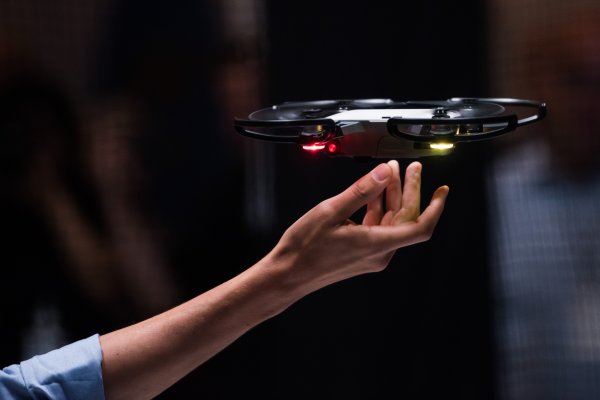 Just Got a Drone for the Holidays? Check Out These Important Safety Tips First
Next Up: Editor's Pick