The Bachelor Recap: Bekah Reveals Her Age and Women Eat Worms to Prove Who Loves Arie the Most

Welcome back to The Bachelor, where recycled star Arie Luyendyk still has 15 chances to find love on reality television. We’ve reached the point in the season where Arie is taking his show on the road, so Chris Harrison can get a few more stamps on his passport, and the women can leave the comfortable confines of The Bachelor mansion for the shores of Lake Tahoe. We’ve also reached the point in the season where at least one contestant has started referring to herself in the third person. (“This is such a good place for Kendall,” said Kendall.)

Here’s what else happened on The Bachelor:

Seinne, the Yale-educated woman who is apparently not too smart to be on The Bachelor, is invited to go para-sailing with Arie and all the other women watch through binoculars from the deck of their house.

Krystal, who is not at all jealous, says that while Seinne has a date today, she will most likely be going home tonight. When Seinne runs for president someday, Krystal will definitely not vote for her. Despite the fact that she’s way too good for him, Seinne really likes Arie. However, like every other person who resorts to looking for love on reality television, she hasn’t been in love in a long time and has built up some walls around herself. While normally that sort of admission sets a contestant up for immediate dismissal, Arie and Seinne make out on the beach.

Then Arie takes her to the Hard Rock Café, where she grills him about his love life and talks about her fears and the fact that as an African-American woman she never had fairy tale role models. Arie appreciates her honesty and vulnerability and rewards her with the Date Rose. Then he takes her to slow dance on a podium in front of a crowd while clean country crooners Lanco serenade them.

Maquelle is on the phone, which does not bode well, because cell phones are strictly forbidden in Bachelor land. That means it’s either an ex-boyfriend who wants to get back together or a family tragedy. Sure enough, it’s her mother reporting that her grandfather passed away. She packs her bags and her roses and leaves. She’ll probably be back.

For the group date, Arie takes a Whitman’s Sampler of Chelseas, Krystals, Laurens, Tias, and Brittanys out into the woods around Lake Tahoe to teach them survival skills. Hopefully that means a Bachelor/Survivor crossover of our dreams is coming to television soon. A former Green Beret teaches the women how to not die in the next hour or two while encouraging them to drink their own urine and eat maggots and earthworms while it snows. “I would drink my pee for Arie,” said Jenna. While some of the girls wilt at the prospect of eating bugs or drinking waste, Kendall says, “This is the kind of date where Kendall shines.” Then she eats a worm, but because Arie eats one, too, they can still make out in the woods. The women are then let loose in the woods with a map that one assumes simply reads “Hot Tub Here.” They navigate to it in no time, because hot tubs are basically Bachelor bait.

Cabin in the Woods

At the after party, Arie takes the women to a forest cabin, which would be creepy if this was a horror movie. He and Kendall take a moment to stare into each other’s eyes and Arie deems her “quirky” yet still sexy. She promises to bring her taxidermied duck to the Rose Ceremony. Krystal is not having fun, because she had to compete for Arie’s attention today and she did not like that. “It’s hard,” she pouts while making puppy eyes at Arie. He comforts her, even sending Tia away to comfort her more, because he is a sucker. “I am just floored with the insecurities and immaturity,” Krystal says later. “I don’t know how I’m going to get through the elimination of all these women.” She also says “like…” so often that even The Bachelor started trolling her on social media.

Turns out that Krystal had her feelings hurt earlier so decides to confront Tia and some other woman about their behavior, which didn’t go over very well. Tia ends up walking away and pulling a Krystal and asking Arie to comfort her. He assures her that he cares about her (and at least 12 of the remaining 15 women, but also her). Tia plays it right and is both open and vulnerable, and it works—Arie gives her the Date Rose. That makes Krystal pout even more, which one would not think was possible.

The producers really want viewers to know that Bekah M. is a baby who is 14 years younger than Arie. “Arie is looking for a woman, not a girl,” says Krystal. Everyone seems to know except Arie, who will presumably find out on this date—as soon as they stop making out in a hot tub in the woods.

They finally emerge from the hot tub, leave the woods behind, and head to a quiet dinner by the fire. Arie wants to know if Bekah is ready to get married and settle down, because that’s why he is on this dang show again. Bekah asks, “Do you know how old I am?” and then tells him that she is 22. Arie replies, “Oh my god. Twenty-two?! You’re so young. Have you ever dated someone my age?” Which is pretty much the four stages of grief of a man realizing someone is way too young for him. Arie’s motherboard seems to shut down at that point and he stares blankly into space while Bekah tries to explain that she is very mature for her age. He gives her the rose, but he gives it with a lot of reservations. He threads his finger through her hoop earring and kisses her.

While the women wait for the champagne to start pouring, Chris Harrison comes in and tells them that the cocktail party is cancelled. As the ceremony begins, Krystal calls for a time out and asks Arie for a quiet moment away to remind him that he once loved Emily Maynard and can love her, too. Arie listens politely before doling out roses to a string of other women—Kendall, Lauren, Ashley, Bekah, Chelsea, and a whole bunch of other women. Then it’s the final rose and he hands it to Krystal who almost dies from the cold sweats even though she, like, totally had a lot of faith in their strong relationship. The first thing one woman does when she realizes she is leaving is to take off her heels, which is hard not to respect. 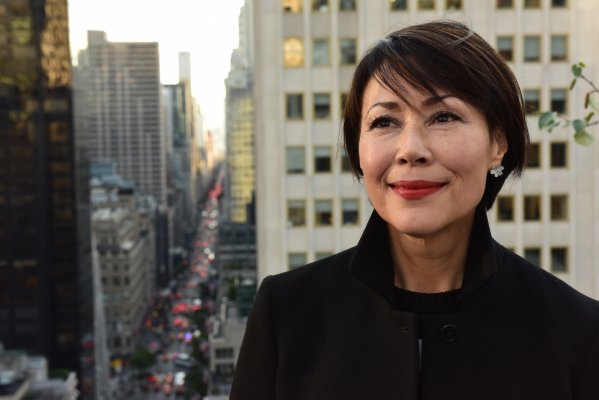 Ann Curry: We're All Living Through a Moment That Will Make History
Next Up: Editor's Pick