Violence in East Ukraine Ratchets Up Tensions With Russia

Pro-Russian supporters clash with members of the riot police as they storm the regional administration building in Donetsk, Ukraine, on April 6, 2014
Alexander Khudoteply—AFP/Getty Images
By Sam Frizell

Pro-Russian protesters stormed government buildings on Sunday in three eastern Ukrainian cities, a move the Ukrainian government said was orchestrated by the Kremlin as tensions between the two nations rise further.

Protesters clashed with police in Donetsk, Luhansk and Kharkiv, waving Russian flags and calling for independence from Ukraine. In the industrial hub of Donetsk, about 50 protesters broke from a rally of 2,000 and seized the regional government building, and protesters stormed security-service offices in nearby Luhansk, the BBC reports.

Ukraine’s interim President Oleksandr Turchinov called an emergency meeting in Kiev and canceled a trip to Lithuania to deal with the crisis.

The Ukrainian government blamed the seizure of government buildings on intervention by the Russians and now deposed Ukrainian President Viktor Yanukovych, Reuters reports.

“[Vladimir] Putin and Yanukovych ordered and paid for the latest wave of separatist disorder in the east of the country. The people who have gathered are not many but they are very aggressive,” Ukraine’s Interior Minister Arsen Avakov said in a statement on his Facebook page.

“The situation will come back under control without bloodshed. That is the order to law-enforcement officers, it’s true. But the truth is that no one will peacefully tolerate the lawlessness of provocateurs,” he said.

Russian President Putin has promised to protect Russian speakers in eastern Ukraine and has amassed tens of thousands of troops on the border in recent weeks. Ukraine blamed Russia for instigating civil unrest in Crimea before it annexed the territory in March. 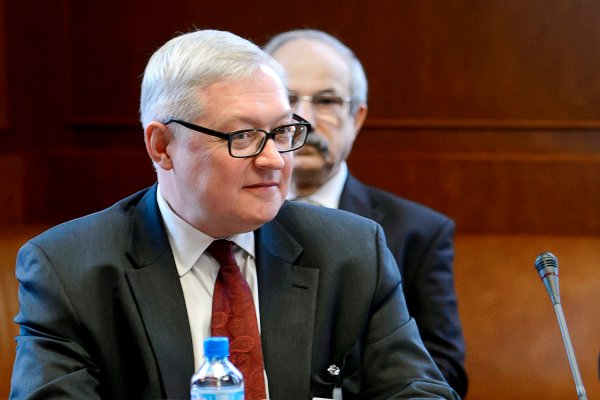 Upset About Crimea? Then Try Yoga, Says Official
Next Up: Editor's Pick