Here's Who Morgan Freeman Called Out During His SAG Awards Speech

After Morgan Freeman appeared to call out a specific person in the audience during his speech at Sunday’s 24th annual Screen Actors Guild Awards, viewers were left wondering who the 80-year-old actor was talking to.

“Hey…I’m talking to you. Yeah, hey,” he said into the mic while accepting his Lifetime Achievement Award. “Okay, well you just stand out to me, that’s all.”

But while it may have seemed like he was singling someone out for interrupting him, Freeman clarified backstage that he was actually just greeting Lily Tomlin. “Yeah. That was Lily Tomlin,” he told reporters in the press room, according to People. “She’s a wonder in herself and I’ve always loved her. I see her, I say hello.”

Freeman closed out his speech by criticizing the appearance of the statuettes given out at the awards show. “Oh and one more thing. I wasn’t going to do this,” he said. “I’m going to tell you what’s wrong with this statue. It works from the back…from the front, it’s gender-specific.” 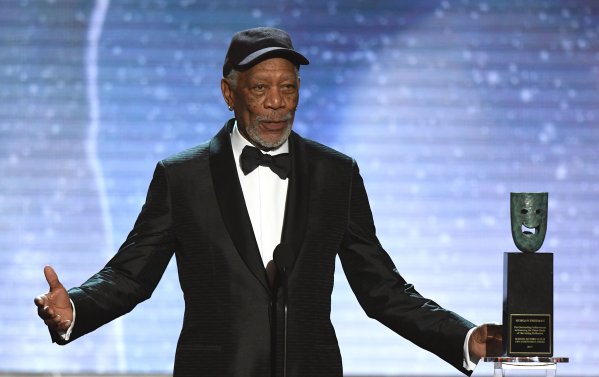 Morgan Freeman Criticizing Male SAG Statuettes Was the Call Out Heard Around the Internet
Next Up: Editor's Pick