These Are the 16 Democrats Who Opposed Ending the Shutdown

Senate Democrats joined Republicans to vote 81-18 to end a government shutdown, based on a promise from Senate Majority Leader Mitch McConnell to take up immigration in the coming weeks.

But not everyone was on board with the plan.

Sixteen senators who caucus with the Democrats and two Republicans voted against the plan to end the shutdown. Among Democrats, the defections were largely over concern that McConnell’s promise was not solid enough grounds.

The list of Democrats includes a number of prominent contenders for the 2020 presidential nomination, including Sens. Cory Booker of New Jersey, Kirsten Gillibrand of New York, Kamala Harris of California, Bernie Sanders of Vermont and Elizabeth Warren of Massachusetts.

Other Democrats voting against the measure were Sens. Richard Blumenthal and Chris Murphy of Connecticut, Catherine Cortez Masto of Nevada, Dianne Feinstein of California, Mazie Hirono of Hawaii, Patrick Leahy of Vermont, Ed Markey of Massacusetts, Bob Menendez of New Jersey, Jeff Merkley and Ron Wyden of Oregon and Jon Tester of Montana.

“I am deeply disappointed that today’s outcome fails to protect Dreamers. They deserve better from the elected leaders of the only country many of them have ever called home,” Gillibrand said after the vote. “I want to see the government re-open as much as anyone, but this bill fails to fix the moral issue we must solve. That’s why I voted against it.”

Harris said that McConnell’s assurances that the Senate would devise a solution for DACA recipients simply weren’t enough. “I refuse to put the lives of nearly 700,000 young people in the hands of someone who has repeatedly gone back on his word,” she said.

With the exception of Montana Senator Jon Tester, none of the ten Democratic Senators up for reelection this year in states President Trump won in 2016 voted against the measure,

Republican Sens. Rand Paul of Kentucky and Mike Lee of Utah also voted against the measure. 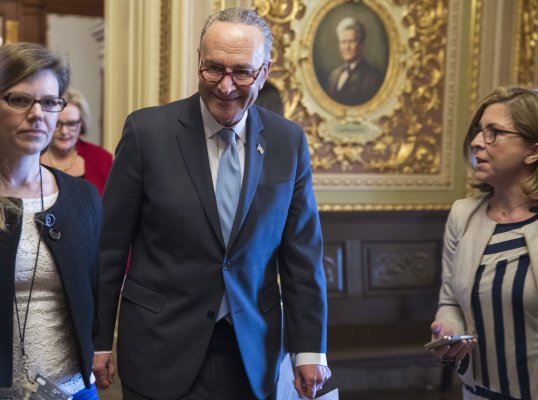 How the Democrats Lost the Battle Over the Government Shutdown
Next Up: Editor's Pick