Sunday marked a major celebration for fans of the Philadelphia Eagles and New England Patriots, as both teams won their respective playoff games to clinch a spot in this year’s Super Bowl. For Eagles supporters, this chance has been a long time coming: the last time they appeared in a Super Bowl was 2004, when they lost to the Patriots. (The Pats, meanwhile, just took home the trophy last year and in 2015) Passionate revelers of both teams took to their cities’ streets after victory was declared, and it was quite a scene.

To prepare Philly’s streets for the game aftermath, cops greased up light poles with Crisco in advance, not wanting fans to attempt to climb the poles. But one Eagles fan was so distracted by celebration that he ran into a pole anyway, on a subway platform.

Others took advantage of the general chaos to ride on top of cars, do jigs within traffic cones, and generally enjoy the debauchery.

The Patriots, meanwhile, have a whole dance going to mark their return to football’s biggest game.

Kickoff for Super Bowl LII is 6:30 p.m. ET on Sunday, Feb. 4, and it will see the Eagles and Patriots face off at U.S. Bank Stadium in Minneapolis. Regardless of who wins, the East Coast can prepare itself for another wild night in both Boston and Philly. 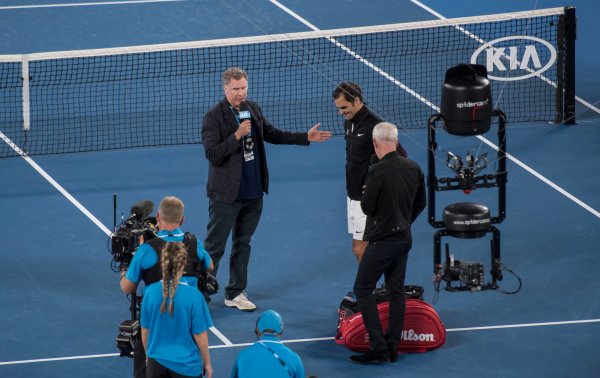 Ron Burgundy Just Stole the Show at the Australian Open by Trolling Roger Federer
Next Up: Editor's Pick