Mexico has recorded its highest homicide rate in years, with the government’s interior ministry reporting there were 29,168 murders in 2017, more than in 2011 at the peak of Mexico’s drug cartel-stoked violence.

The death toll is Mexico’s highest since the government began keeping records in 1997, and shot past 2011’s tally of 27,213 homicides, the Associated Press reports. According to the Interior Department, Mexico’s homicide rate this past year equated with 20.5 murders per 100,000 residents; in 2011, that figure was 19.4.

The homicide rate is still significantly below those of Brazil and Colombia (both 27), Venezuela (57), or El Salvador (60.8), AP reports. However, the per-100,000 figure is based on the number of police investigations, rather than individual deaths, Mexico security analyst Alejandro Hope said, meaning the total real rate is likely far higher.

“The violence in Mexico has many causes. Drug trafficking is one of them, of course, but it is not the only one,” Hope told AP, while suggesting that the increasing toll is a “regression to the mean” over the lower murder rates Mexico enjoyed between 1997 and 2007.

Mexico President Enrique Pena Nieto had campaigned pledging to end the epidemic of drug cartel violence that plagued the country between 2006 and 2012, but his administration saw only a temporary dip in homicides between 2012 and 2014.

Mexico is preparing for another election in July, with left-wing provocateur and former Mexico City mayor Andres Manuel Lopez Obrador the early frontrunner, and gang violence may again prove a key polling issue. In the beginning of Jan., nine people were brutally killed in the Gulf coast state of Veracruz in a suspected conflict between rival gang factions, Reuters reported. 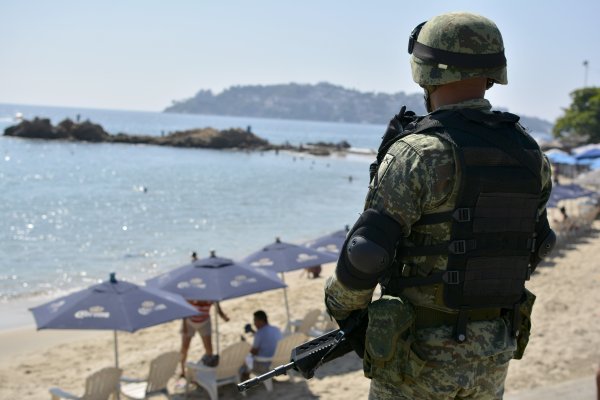 This Map Shows Where Americans Are Being Told 'Do Not Travel' in Mexico
Next Up: Editor's Pick