Screen Actors Guild Awards 2018: A Recap of The Best, Funniest, and Most Political Moments

This year the 24th Annual Screen Actors Guild Awards blended Hollywood glamour with a strong message: Time’s Up. To get their point across, not only did the show exclusively have female presenters to dole out all 13 awards, but they also had Kristen Bell serve as its first ever host of a show that has traditionally not felt the need for one.

The show opened with actresses recounting their childhood dreams of being stars and all the hard work they put in to get to their tables at the Shrine Auditorium. Bell then reminded the crowd that Hollywood had a lot of hard work to do, but change was coming.

“As we march forward with active momentum and open ears,” said Bell, “let’s make sure we’re leading the charge with empathy and with diligence, because fear and anger never win the race.”

Here are the best, most awkward, and most political moments from the 2018 Screen Actors Guild Awards:

Best One-Line Political Commentary: Early in the ceremony, Bell set the tone by delivering this subtle zinger: “Elisabeth Moss is here from the documentary The Handmaid’s Tale.”

Best Reason to Let It Go: “Regardless of our differences we can all come together and delight in one thing—Frozen 2 is coming in 2019,” said Bell.

Most Awkward Family Drama: An E! news reporter asked GLOW star Alison Brie about the sexual misconduct allegations against her brother-in-law, James Franco. Brie stood by Franco, saying: “Not everything that’s been reported has been accurate, so I think we’re waiting to get all the information.”

Best Political Shade Throwing: As the first person to ever host the ceremony, Bell dubbed herself the unofficial First Lady of the SAG Awards and decided that like the First Lady of the United States, she was going to take the lead on a particular issue. “I think my first initiative as First Lady will be cyberbullying,” said Bell. “Because I have yet to see any progress made on that problem quite yet.”

New Favorite Show: When Maya Rudolph came out to present an award, she paused to chat with Bell. “I love your show about living in hell, what’s it called again?” she asked. Bell replied, “It’s called 2018!”

Most Edge-of-The-Seat Moment: When the category for Outstanding Performance in a Comedy Series was announced, it included the embattled actor Aziz Ansari. When Maya Rudolph announced the winner, she paused for a moment and it seemed that she might be stalling in calling Ansari’s name. If he had won it would have been a headline grabbing, think-piece generator that could have overshadowed some of the good work that the show was doing. Luckily, William H. Macy won for his work in Shameless and the world was spared that awkward moment and was instead given Macy’s delightful reminisces on acting. “I think it’s a glorious way to make a living, especially in this day and age when so many people either can’t recognize the truth or don’t think it’s important,” he said.

The History-Making Award: Julia Louis-Dreyfus deservedly won the Outstanding Performance by a Female Actor in a Comedy Series for her work in Veep, becoming the first TV actress to win five individual trophies. She was not in attendance, for good reason and presenters Connie Britton and Mandy Moore accepted the award on her behalf and sent Louis-Dreyfus their love. Bet Louis-Dreyfus’s acceptance speech would have been a winner, though.

The Most Veep Acceptance Speech: Veep took home the award for Best Ensemble Cast. Since he plays a press secretary on the show, the cast appointed Matt Walsh to deliver their acceptance speech. “We do so thank you for giving us this wonderful Grammy,” said Walsh before umming, erring, leaving an awkward silence, and then thanking HBO “who isn’t here,” Julia [Louis-Dreyfus] “who isn’t here” and “Anna Chlumsky, who isn’t here” while the rest of the cast shook their heads in faux horror.

Most Back-handed Compliment: Megan Mullally was “hashtag blessed” to be able to present the award for Outstanding Actor in a Limited Series and so was Alexander Skarsgard for winning the award. “A lot of people have been talking about who the greatest male actor ever is,” said Skarsgard on stage. “Is it [fellow nominee] Mr. Robert De Niro? Or the tall dude from True Blood? The thespians have spoken. Thank you very much for that.” For the record, DeNiro did not look “hashtag blessed”.

Best Throwback: Beverly Hills 90210 star Andrea Zuckerman (a.k.a. Gabrielle Carteris) grew up to lead the SAG-AFTRA union—and gave a speech so powerful it rivaled Andrea’s commencement address. “Truth is power and women are stepping into their power,” she said. “Harassment and abuse are no longer tolerated. Make no mistake this is not a moment in time, this is a movement and our strength comes in our unity.”

Most Powerful Moment: Rosanna Arquette and Marisa Tomei gave well-deserved nods to all the women who bravely came forward to tell their stories of assault, harassment, and abuse at the hands of Harvey Weinstein and other members of the Hollywood elite.

Best Acting Award?: Like at the Golden Globes, when Nicole Kidman’s name was called, the biggest smile was on Reese Witherspoon’s face. She looks so genuinely thrilled for her friend, even though she was nominated in the same category. That said, Witherspoon is a very talented actor, so …

Super Trooper Award: Nicole Kidman was working until 1 a.m. the night before the SAG Awards and had the flu—but she wasn’t going to miss the chance to pick up her first ever SAG Award. While picking up the statuette, she gave one of the most inspirational speeches of the night. She called out both sexism and ageism in the industry she calls home, noting “how wonderful it is to that our careers today can go beyond 40 years old.”

Serious Squad Goals: While Rita Moreno presenting Morgan Freeman with his lifetime achievement award, Moreno said that she and Freeman had known each other for 50 years after getting their start on The Electric Company. It is clear they have a strong bond, because they teased each other throughout their respective speeches, culminating with Moreno asking the “old man” if he needed help getting the apparently heavy award off stage.

Highest Achievement in Fashion: Only Morgan Freeman could pull off a baseball cap while receiving a lifetime achievement award.

Best Prank: Kristen Bell pointed out that in a room full of actors she had no need to be nervous, because “everyone is only paying attention to themselves.” To prove her point, she started rattling off random phrases: “Fire pit … meat city … Steve Carell” and the camera cut to the actor who smiled beatifically at the camera. To further test the theory, she then yelled,“Meryl Streep!” and the entire audience automatically got to their feet, before Bell admitted that she wasn’t even there.

Best Dibs: Niecy Nash asked her co-presenter Olivia Munn that if she could announce Sterling K. Brown’s name if he won for his work in This Is Us. Munn asked why and Nash replied, “Because he’s black.” She then offered for Munn to announce any Asian winners, but Munn pointed out that there weren’t any. In the end it didn’t matter, because Brown won and Nash got to make good on her dibs.

The History Making Award, Part 2: Brown’s win made him the first African American to receive the Outstanding Performance by a Male Actor in a Drama award.

Most Tear-Jerking Win: Is it any surprise that when the cast of This Is Us won for Outstanding Ensemble in a Drama (over The Handmaid’s Tale and Game of Thrones) the cast’s reaction made everyone tear up? Of course not! After all, the show makes its audience ugly-cry on the couch on a weekly basis, so they may as well continue the trend at the SAG Awards.

Best Invitation: When Goldie Hawn and her daughter Kate Hudson took the stage, Hawn may have invited everyone to Thanksgiving dinner. So dibs on bringing the pumpkin pie.

Most Likely To Make Oscar Voters Think Twice: If Oscar voters were considering giving Frances McDormand the top acting prize for her work in Three Billboards Outside Ebbing, Missouri, she doesn’t seem to want them to do it. In her acceptance speech for Outstanding Actress in a Drama, she seemed to encourage Oscar voters to give the next award to Saoirse Ronan or Margot Robbie. “There’s a lot of young ones coming up and they need doorstops, too,” she told the audience, which undoubtedly had a lot of Oscar voters in it. “Let’s think about that. Bye.” 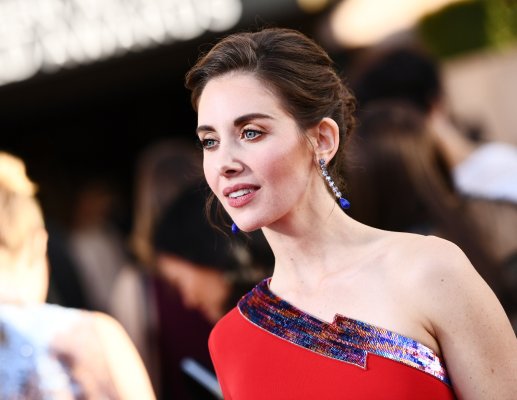 Alison Brie Stands by James Franco at the SAG Awards
Next Up: Editor's Pick