Speaking at the Women’s March in Los Angeles, Natalie Portman detailed the “environment of sexual terrorism” she endured in her youth that impacted the trajectory of her career.

Portman, one of the actors behind the Time’s Up initiative combatting sexual harassment and abuse in Hollywood and other industries, said she experienced sexual harassment at the age of 13 when her first film, 1994’s Léon: The Professional, came out.

Her first-ever piece of fan mail, she said, was a rape fantasy written by a man. Her local radio show created a countdown to her 18th birthday, “euphemistically,” she told the crowd of 500,000 people, “the date that I would be legal to sleep with.” And movie reviewers would mention her “budding breasts” in reviews.

“I understood very quickly, even as a 13-year-old, that if I were to express myself sexually I would feel unsafe and that men would feel entitled to discuss and objectify my body to my great discomfort,” she said.

Portman said she rejected roles with a “kissing scene” and developed a reputation as “prudish, conservative, nerdy, serious, in an attempt to feel like my body was safe and my voice would be listened to.”

“I felt the need to cover my body and to inhibit my expression and my work in order to send my own message to the world that I’m someone worth of safety and respect,” she added. “The response to my expression, from small comments about my body to more threatening deliberate statements, served to control my behavior through an environment of sexual terrorism.”

Portman spoke at the Los Angeles Women’s March Saturday as hundreds of thousands of others around the country took the streets a year after President Donald Trump’s inauguration. Other actors like Viola Davis, Eva Longoria, Scarlett Johansson and Constance Wu spoke in Los Angeles at the march amid a national reckoning concerning sexual harassment, assault and abuse in industries throughout the country.

Many of these actors sported black at the Golden Globes earlier this month to raise awareness about the issue. Some took it a step further, bringing activists like Tarana Burke, the founder of the #MeToo movement, as their guests to the event.

Portman had a particularly memorable moment that night. When introducing nominees for Best Director, she pointed out the elephant in the room.

“And here are the all-male nominees,” Portman said as the audience erupted. 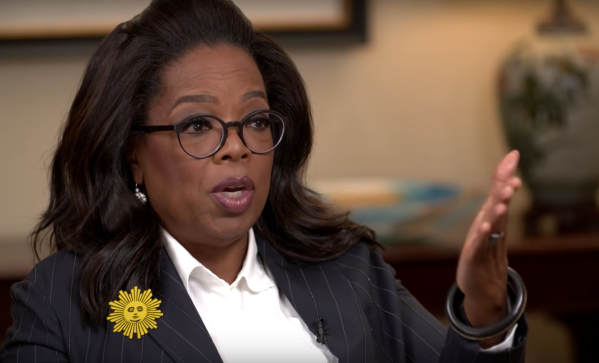 Oprah Interviews Hollywood Stars About Time's Up
Next Up: Editor's Pick