SNL Actors Break Character in 'What Even Matters Anymore' Sketch

Saturday Night Live took an unusual turn this weekend when actors broke the fourth wall during a gameshow sketch that posed the question: “What even matters anymore?”

It began with Saturday night’s host Jessica Chastain playing gameshow host Veronica in what she said was a “show where I tell you something our president did or said, and you have to tell me: Does it even matter anymore?”

The first question Chastain poses: “The president refers to African countries as ‘poo-poo holes’ and says all Haitians ‘have AIDS.’ Does it even matter anymore?”

“That’s really bad,” responds a contestant played by Kate McKinnon. “That has to matter, yes.”

“Actually it does not matter,” Chastain responds. “Zero consequences and everyone just moves on.”

Finally, she asks contestants to write down what would matter — as she drinks directly from a bottle of white wine. She eventually breaks down in tears.

“Jessica,” McKinnon continues. “You don’t have to do this.”

“Yeah, Jessica we know you’re upset about the way our country’s going, but you can’t just build a whole set and make us pretend to be contestants,” Cecily Strong, who was playing another contestant, says.

The sketch then ends with the contestants giving Chastain a hug — “because she really needs it.”

Watch the sketch below: 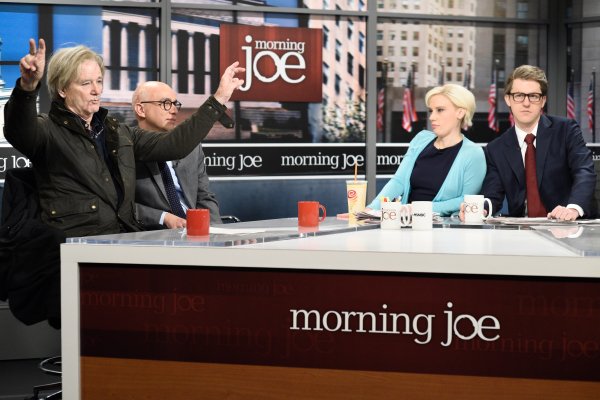 Bill Murray Surprises as Steve Bannon on SNL
Next Up: Editor's Pick