'We Have to Stand Our Ground.' Activists Push Democrats to Fight for DACA Recipients in Shutdown

As a government shutdown loomed, protesters in all corners of the U.S. Capitol pressured lawmakers not relent on their promise to reject any spending bills that did not protect a vulnerable group of immigrants.

They chanted and marched on the brick-paved streets of Southeast Washington. They carried signs and donned hats demanding a vote on legislation that would give immigrants brought to the U.S. as children a legal pathway to citizenship. The group has been at risk since the Trump Administration announced he was rescinding the Obama-era Deferred Action for Childhood Arrivals program that shielded them from deportation.

In the halls of a Senate office building on Friday evening building, they unrolled a hand-painted sign that read: “GOP, Don’t hold the Dream Act Hostage.”

Democrats and Republicans are engaged in a game of chicken on Capitol Hill. Hours ahead of a shutdown, the Senate hit a stalemate on a short-term bill that would fund the government for the next month. The bill would ensure the lights stay on, fund a popular children’s health care program for the next six years, and delay some Obamacare-related taxes. But the bill does not include protections for recipients of DACA. Because of that, immigrant rights activists said lawmakers should reject it.

“We’ve heard some Democrats say that they support us, but we want to see them show that they support us with their votes and vote no on the spending bill without a Dream Act attached, ” said Sadaf Raza, 21, a student activist from Arkansas who joined a protest earlier on Friday.

Said Xiomara Caldera, 20, another student activist: “For any lawmaker who has voted on a spending bill without a Dream Act attached. I really just want to say to them, shame on you.”

While the continuing resolution passed with mostly Republican support in the House, its prospects are dimmer in the Senate. Given Republicans slim majority, it would need Democratic votes to pass. But because the bill lacks language on DACA and other Democratic priorities, many Democrats have said they cannot support it. If some vulnerable Democrats who are up for reelection in states that Trump won in 2016 are willing to cast votes for the measure, it would have a chance of passing before the midnight deadline.

Regardless, Republicans have seized on Democratic opposition. Before the House even voted, they’d begun placing the blame on Democrats who they say want to shutdown the government in order to protect illegal immigrants.

“Apparently they believe the issue of illegal immigration is more important than everything else,” Senate Majority Leader Mitch McConnell said in a floor speech on Friday morning. “All of the essential services the American people depend on.” McConnell called the Democrats’ position as “completely unfair and uncompassionate.”

But for many grassroots activists, it’s the complete opposite. “I think it says a lot about the Republican Party that they’re willing to pit children against immigrant youth when we know that both issues are important,” says Alondra Gomez, 21, a DACA recipient and Tennessee college student who has been in Washington for the past week lobbying lawmakers. “It’s just vile. It’s cruel that they want to do this. We have to stand our ground.”

The night before, she and other activists sat in the gallery of the U.S. Senate as Republican leaders insisted that lawmakers had until March to come up with a legislative solution for Deferred Action for Childhood Arrivals, an Obama-era program that shielded some young immigrants from deportation. In reality, she said, the situation is much more dire. Her own DACA paperwork expires in September of this year and many of her friends have already lost their protections. And when Illinois Sen. Dick Durbin, who has long supported legislation to give legal status to immigrants who were brought to the U.S. by their parents, implored his colleagues to consider the fate of an estimated 122 Dreamers who lose DACA protections everyday, Gomez cried.

“For the first time, those Republicans had to see us. We’ve been going to their offices and they kick us out. They don’t hear our messages. They act as if they don’t care,” she said. “They had to acknowledge that we’re watching. That the whole country is watching.”

Activists reject the notion that the Democrats fight for immigrant protections puts beneficiaries of a child health insurance program at risk — there is appetite for both and lawmakers should be able to handle both, they say.

For their part, Democrats have said their opposition to the continuing resolution goes beyond the lack of protection for Dreamers. They are criticizing Republicans for failing to negotiate with them on a number of legislative priorities and said another short-term bill would not solve major funding issues. House Minority Leader Nancy Pelosi said Republican efforts to add funding for children’s health insurance to the bill in order to drum up Democratic support is like trying to pass off a “bowl of doggy doo with a cherry on top” as a chocolate sundae.

If the government shuts down, there will be a rush to place the blame on one party over the other, but the young immigrants at the center of the push-and-pull say it is not fair to say their calls for a legislative fix to an issue that was manufactured by the Trump administration will be the reason any short-term CR fails.

“This shut down is not an immigration shutdown,” said Patrice Lawrence, the policy director for the UndocuBlack Network.“This comes down to Republicans not doing their job.” 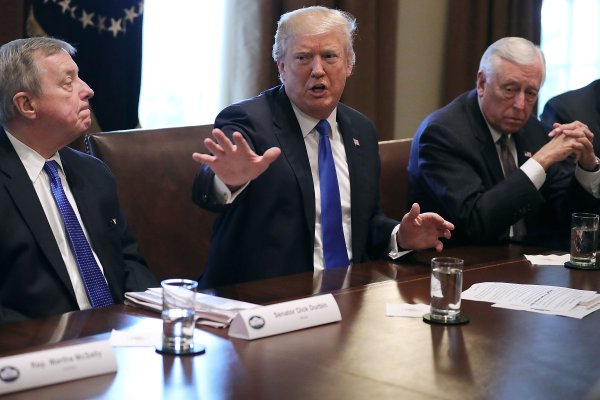 Congress Waits for Trump to Close Immigration Deal
Next Up: Editor's Pick