Sen. Warren: America Can Never Go Back to the Era of Back-Alley Abortions

When I was a girl growing up in Oklahoma, women got abortions. But because those procedures were illegal, many of them ended up with back alley butchers. And we all heard the stories: women who bled to death or died from an infection.

One of my older brothers and I can argue left-right politics all day and all night, but when it comes to reproductive rights, we see it the same way: A woman should make this very personal decision — and the government should stay out of it.

We’re in step with most of America. Nearly 70% of all Americans agree that a woman’s reproductive decisions should stay between her and her doctor.

On the 45th anniversary of Roe v. Wade, I think about what has changed since abortions became legal. Our health care system has pretty much dealt with the safety issue: thanks to Roe v. Wade, abortion is now safer than getting your tonsils out. A lot of women are alive today because of Roe.

But Roe has had another enormous impact. Access to safe abortion services has changed the economic futures of millions of women.

As any parent knows, starting a family is a big commitment — in part because the decision to have children carries massive economic consequences. The totals are striking: middle-income parents with two kids will spend roughly $13,000 a year to raise a child from birth through age 17. But the cost of car seats and baby strollers is only the tip of the iceberg. Immediately after having children, women experience a measurable decline in take-home pay — a decline that continues throughout their lives and on into retirement.

For a young couple with modest wages and piles of student loan debt, the decision to start or expand a family is a powerful economic issue. For a woman working two jobs with two kids in day care, an unplanned birth can put her entire family at risk. For a student still in high school or working toward her college degree, an unexpected pregnancy can derail her most careful plans for financial independence.

This reality is not limited to American women. A recent analysis conducted across 14 countries found that “socioeconomic concerns” was one of the most commonly-cited reasons for terminating a pregnancy. From Ghana to Turkey, Belgium to Nepal, women reported getting abortions because of “financial problems,” a “lack of money,” or because they “can’t afford a baby” or “leave [their job]” to take care of one. In the United States alone, 40% of women report seeking abortions because they aren’t “financially prepared” to have a child.

That’s why access to affordable reproductive health services is so important. Today, women pay an average of $480 to have an abortion during the first 10 weeks of pregnancy and pay even more in the second trimester. As states erect more barriers to abortion, women are forced to travel farther, take more time off work and pay higher fees to terminate pregnancies. These financial barriers fall hardest on the three-fourths of abortion patients who are young and have little income.

Abortion rights are under threat across the country, as anti-choice politicians push for policies that restrict women’s access to abortion services. And they have an ally in President Trump, who spent his first year in office relentlessly attacking women’s reproductive rights. And it’s not just abortion rights. Services that would help women prevent unplanned pregnancies, or care for children after having them, are at risk. Affordable health care, accessible contraceptives and other programs that support working women and families are on the line, too.

When making policy about women’s bodies, government officials should trust the women whose lives and futures are on the line. Safety and economic security — that’s what Roe v. Wade is still all about.

I lived in a world of back alley butchers and wrecked lives. We’re not going back — not now, not ever. 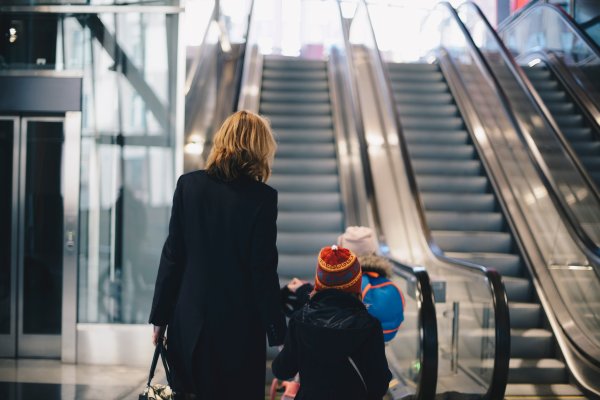 No, All Those Strollers Aren't Your Imagination. More Women Are Having Children
Next Up: Editor's Pick