It’s the 45th anniversary of the Supreme Court decision in Roe v. Wade, which finally recognized women’s inherent right to control their own bodies — making abortion legal across the country and taking a major step toward the recognition that if a woman’s body is not her own, she cannot truly be free or equal.

For 45 years this has been the law of the land — in theory.

The reality for women, especially women of color, has always been miles from the ruling. In theory, after centuries of discrimination deeply ingrained in our laws and culture, women in the United States are free to vote, to own property, to walk freely down the street, to work in every field and occupation that exists and to have an abortion if they decide to do so. In theory, we’re free to do all of that without the government interfering. But under President Donald Trump and Vice President Mike Pence’s administration, many of the rights we thought we had face historic threats.

In response, women are mobilizing like never before to make their equality — and the rights it requires — a reality.

One year ago, approximately 4 million people took to the streets across the country and around the world to participate in the Women’s March. Each person had their own reasons for marching, but from where I stood in Washington, D.C., reading the handmade signs, many of them correctly saw the threat that the incoming administration posed to access to safe and legal abortion.

Every time since January 21 that President Trump, Vice President Pence and Republican leaders in Congress proposed legislation to repeal access to health care and block patients from coming to Planned Parenthood, Americans have resisted — filling congressional voicemail boxes and flooding town halls until members of Congress went into hiding. The vast majority of the agitators were women.

Boldness breeds boldness and today there are a record number of women running for office to demand government policies live up to the country’s unfulfilled promise of equality.

And women and men from the Hollywood hills to farm workers in Florida’s tomato fields to factory workers in Detroit are telling their #MeToo stories and calling “TIME’S UP” on exploitative men who think they’re entitled to other people’s bodies.

Our work now is to make our bodies our own not just in theory, but in reality. Because for women in many states, the government’s interference has put abortion all but out of reach.

Since the day Roe was decided, anti-abortion extremists in Congress and statehouses have been chipping away at the ruling, imposing their personal beliefs on everyone else. Since 2010, state politicians have passed 338 laws making it harder for doctors and clinicians to provide abortions and forcing women to jump through hoops to get them. These include forcing women to wait up to 72 hours before terminating a pregnancy, to be given misleading information or undergo a medically unnecessary ultrasounds. The Supreme Court ruled in 2016 that many of these laws are unconstitutional, yet they remain on the books.

A constitutional right to abortion isn’t much help to a woman in Arkansas who has to travel hundreds of miles to get one. It’s not much help to a woman who is insured through Medicaid, but is barred from using it to pay for her abortion due to the Hyde Amendment. And it’s not helpful to a 17-year-old immigrant teen in a south Texas detention center seeking an abortion, but being prevented from obtaining one by E. Scott Lloyd, the director of the Office of Refugee Resettlement in the U.S. Department of Health and Human Services and also a well-known anti-abortion activist.

The politicians behind these laws are the same people who are trying to roll back coverage for birth control, and the same people who are now in charge of the Department of Health and Human Services, overseeing birth control services they don’t actually support, for the entire country. Increasingly, this administration makes Margaret Atwood’s The Handmaid’s Tale look like prophecy. But there are millions of Wonder Women — and some Supermen — defying and resisting. And together, we’re unstoppable.

The women who marched one year ago, the women running for office, the women telling their stories of sexual assault and harassment and Planned Parenthood’s 11 million supporters are all fighting for our ability to control our own bodies and drive our own destinies.

On this 45th anniversary of Roe v. Wade let’s recognize that a future where women pursue their lives and work free from sexual assault and harassment, where all women are truly equal, can’t be a reality if Roe remains a theory — or worse.

Dawn Laguens is the executive vice president of Planned Parenthood Federation of America. 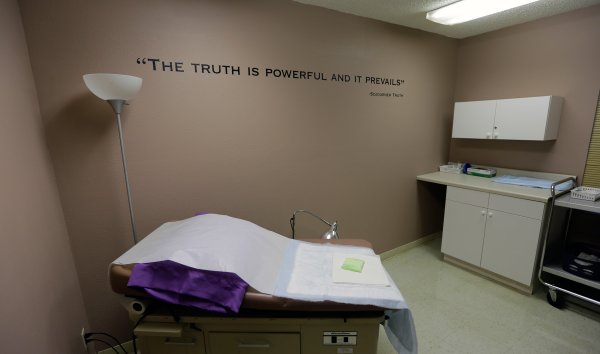 Abortion Providers Are Human Rights Workers
Next Up: Editor's Pick