The Twisted Psychology of Parents Who Torture Their Children

By Jeffrey Kluger and Belinda Luscombe

Don’t try to fathom what was going on in the minds of the California parents who starved and imprisoned their 13 children for years before one of the victims escaped and informed the police last weekend. Really, there is no unraveling it—not fully, at least. Basic empathy and the care of offspring are among the most fundamental lines of code in the human operating system. When that gets corrupted—when the protectors become tormentors, when the nurturers become jailers—it’s nearly impossible to grasp, much less explain.

That doesn’t mean that forensic psychologists and others aren’t trying. Even as the Turpin children begin a long period of recovery, and the parents—David Turpin, 56, and Louise Turpin, 49—face sentences of 94 years to life, experts are trying to understand both the dynamics of the home and, more mysteriously, the parents’ motivations.

The darkest part of an already dark reality is that while children may be abused by all manner of people, parents are overwhelmingly the likeliest offenders. According to the National Child Abuse and Neglect Data System (NCANDS), 71.8% of child abuse or neglect cases occurred at the hands of victims’ parents in 2015, the most recent year for which numbers are available. The leading risk factors in that study were—no surprise—parental alcohol abuse, drug abuse or domestic violence.

In the Turpins’ case, there are no reports yet of substance abuse. And while the treatment the Turpin children received was violence by any measure, it was less systematic battering—though that was part of it—than a sort of patient, sadistic torment: reportedly forbidding them to use the bathroom, allowing them to shower only once a year, starving them while at the same time tormenting them with fresh pies placed just out of reach. Drugs, alcohol or uncontrolled anger don’t explain that kind of slow, cold cruelty. But other factors might.

“In my experience there is usually a psychopathology in the parents,” says trauma psychologist Priscilla Dass-Brailsford, an adjunct professor in the department of psychiatry at Georgetown University. “They’re depressed perhaps, they’re bipolar, they’re schizophrenic. Some of the parents themselves might have been abused as children, though I say that warily because it’s not an excuse to abuse your own children.”

David Finkelhor, professor of sociology and director of the Crimes Against Children Research Center at the University of New Hampshire, sees two other diagnostic profiles that might fit the parents: delusional or paranoid states, which can lead to all manner of irrational or abusive behavior.

A misguided ideology might be another factor. “Parents may tell themselves they’re protecting their children from the corruption of an awful society,” says Finkelhor, “or that children are evil and need to be chastised or brought into line.”

The starvation may have been a similarly convoluted way of dealing with the business of feeding a family of fifteen. Louise Turpin was listed in records as a homemaker. While her husband appears to have been unemployed in recent years, he worked as an engineer at Northrop Grumman at an annual salary of $140,000 as recently as 2011. But that was the same year the Turpins filed for bankruptcy, listing debts of $100,000 to $500,000.

“He may have felt like this was the only way for the family to survive under the pressures that were being imposed on them by society,” says Finkelhor.

The co-conspiratorial nature of the crimes implicates both spouses equally, and they have been charged accordingly. Initial suspicion, however, will likely fall mostly on the husband as the initiator. The seven-year age difference between the two is not terribly much, but it would have seemed bigger when they married 32 years ago. He was also the principle wage-earner in the household, which creates its own kind of power disparity.

“It may just be that she drank his Kool-Aid,” says Finkelhor.

Not all experts would be so likely to give Louise Turpin even a small pass. Elizabeth Skowron, a professor of counseling psychology and a research scientist at the University of Oregon’s Prevention Science Institute, says that in her group’s work, mothers are very often both the perpetrators and initiators of abuse. The NCANDS data backs that up, with 70% of victims mistreated by the mother, the large majority of those times without the participation of the father. Still, in this case, she sees a potential for collaboration.

“From what I can gather, they’re both in this eyeball-deep,” says Skowron. “[It seems like they were] mutually engaged in keeping their children held hostage.”

One additional risk factor for either or both parents might be a state that Skowron calls “extreme threat-sensitivity,” often seen in highly abusive parents. “They view the world through a lens of things that are threatening, that ‘my child is more powerful than me,'” she says. “‘If I am in complete control then I can calm down.'”

Indeed, Skowron says that such parents actually become more physiologically stressed in the few instances that they show nurturing behavior to their children. Better — for the parents at least — to crack back down and feel that their world is in order again.

All of this will be for the Turpins to contemplate during the lifetime of imprisonment they likely face, and for the children to resolve in the longer, potentially much brighter futures they have ahead of them. Trauma specialists are generally sanguine about the ability of children to recover from such unimaginable abuse, which is one mercy. Another will be if what’s learned from the horror show of the Turpin home helps prevent or at least mitigate the next such tragedy. 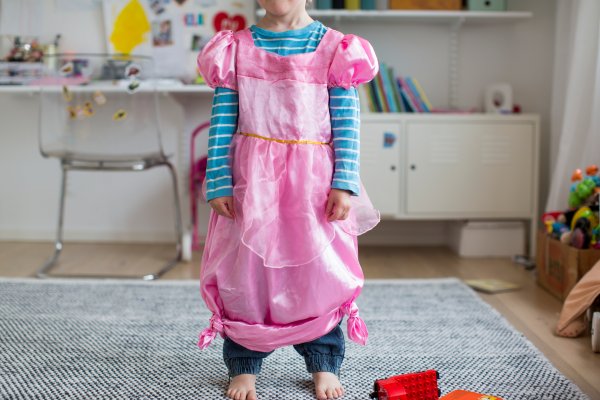 Preschoolers Know More About Gender Identity Than You Might Think
Next Up: Editor's Pick