Like much of U.S. history, the story of Roe v. Wade – a landmark Supreme Court ruling and victory for women’s health — is complicated by who was left behind. The United States is a country built on the backs of Black women, and benefits daily from our intellectual genius, cultural influence and economic power, yet neither the promises of the founders nor the promise of reproductive autonomy enshrined in Roe v. Wade included us.

Black women live in states considered hostile or extremely hostile to abortion rights. We are less likely to have health insurance, and more likely to be denied coverage for abortion when we do. Black women also often struggle to afford the birth control that best meets our needs.

Yet state legislators seem intent on passing laws that make it ever more difficult for women of color to access abortion care specifically, and sexual and reproductive health care in general. Since January 2011, state politicians have enacted an astounding 401 new restrictions on abortion. These restrictions force patients to delay care, force clinics to shut down and block some people from access altogether. Black women, who already experience an unequal playing field when it comes to health care, can ill-afford the anti-abortion wave that threatens to drown access for all but the wealthy.

As if that weren’t bad enough — Black women in the U.S. are dying in childbirth and from pregnancy-related complications at many times the rate of white women, a national health crisis that has gone largely ignored. The recent death of Erica Garner, just months after giving birth, is a prime example. These challenges have been with us for a long time. But there’s no question that recent measures by our government are hurting, instead of helping, the situation.

President Trump has levied attacks on abortion and birth control and pushed cruel anti-family budget and tax policies. His administration has also proposed budgets that slash the funding for nutrition, housing and health care programs that Black women and families need to thrive. And Congress has failed to reauthorize the Children’s Health Insurance Program — also known as CHIP — which covers almost 9 million U.S. children.

But we’re fighting back.

In Alabama, the role of Black women in electing Doug Jones who supports abortion access in a race most considered impossible to win by a Democrat was finally recognized. Black women are also rising up to run for office, stage massive marches, push for proactive policy solutions and are leading the way on community organizing and integrated voter engagement.

In Pennsylvania, New Voices for Reproductive Justice led advocacy efforts that contributed to the ultimate veto of Senate Bill 3 by Governor Tom Wolf, which proposed banning abortions after 20 weeks with no exceptions for rape or incest. In 2017, 21 states adopted 58 new proactive measures protecting reproductive health care access and information, a sharp uptick from the 28 enacted in 2016. In Illinois, Black women leaders from the Illinois Caucus for Adolescent Health and the Chicago Abortion fund played key roles in passing HB 40, which expanded Medicaid coverage for abortions and protects legal abortion in the state if Roe is overturned.

For too long, Black women have been told to wait their turn. Democrats and Republicans alike have taken our votes for granted while ignoring our needs. But their time is up. We will no longer accept race and gender oppression in our politics, democracy and the overall treatment of women across this nation.

It’s time for this country to put our issues – the issues of Black women – in the center of the political table and follow the leadership of Black women as we build a better future that affirms human rights of all.

La’Tasha D. Mayes is the founder and executive director of New Voices for Reproductive Justice. 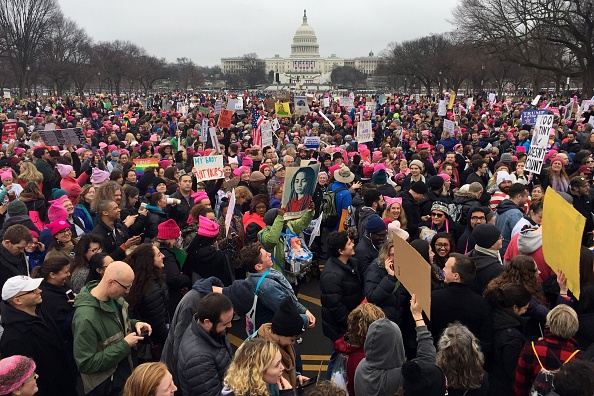 A Year Later, Three Women Reflect on the Historic Women's March
Next Up: Editor's Pick