Participants arrive at the congress centrre prior to the opening of the World Economic Forum in Davos on January 21, 2014.
Eric Piermont—AFP/Getty Images
By Ian Bremmer

A dazed global political and business elite spent last year’s World Economic Forum meeting in Davos—held on the eve of Donald Trump’s inauguration—wondering aloud what the future might hold.

One year later, the future is here. Literally. Donald Trump and a U.S. delegation led by Treasury Secretary Steve Mnuchin are set to arrive in Davos. America’s populist-in-chief will surely make news, but there will be several storylines worth following this year.

Wanted: a leader for the West

German Chancellor Angela Merkel is still trying to cobble together a coalition government after her party “won” German elections in November (this was the weakest of her four election victories.) She didn’t even confirm her place at the Davos table until this weekend, and she will struggle to position herself as the great defender of Western liberal values—especially when it is precisely those values (her expansive welcome for refugees, in particular) that weighed on her popularity at home and forced her to seek a partner in order to form a government.

French President Emmanuel Macron has offered his leadership as an alternative, though he will need German help to realize the most ambitious of his European reform plans, and his steadfast opposition to Trump has won him fans at home and abroad. But French voters care first about security and prosperity in France, and if Macron’s ambitious (and much-needed) economic reforms don’t deliver the expected results, they may well turn on him, just as they turned on traditional parties of the center-left and center-right.

Yet, no one is likely to expect an eloquent defense of Western values from Donald Trump. For now, that seat will remain vacant.

What will Modi say?

China’s President Xi Jinping used his keynote address at Davos last year to step into the global leadership vacuum created by Trump’s “America First” foreign policy, kicking off a months-long PR-push that culminated in his triumphant announcement at China’s 19th Party Congress in October that a “new era” of geopolitics had begun.

We can expect more grand rhetoric from China this week, but more interesting is what Indian Prime Minister Narendra Modi is planning for his opening address to the Davos crowd. India is already the world’s most populous democracy. It’s the world’s seventh largest economy, and it’s expected to become no. 2 (behind China) by 2050. India has adamantly refused to sign up for China’s ambitious One Belt One Road infrastructure project, positioning itself as a potential counterweight to China’s growing economic ambitions in Asia. There’s already active talk of strengthening an Indo-Pacific security partnership between the US, India, Japan, and Australia.

Expect Modi to focus his speech on economics, but listen carefully for any reference to India’s views on geopolitics.

The Trump in the room

Let’s state the obvious: It’s only the departure of senior strategist Steve Bannon that allows Trump to rub elbows with fashionable globalists at this mountain resort in Switzerland. Bannon was one of the president’s few advisors whose devotion to economic populism was genuine. With Bannon gone, and cut loose by the Breitbart media machine, Trump is free to set out in search of flashbulbs, of which Davos will have many. How could this president miss the opportunity to pass among the world’s movers and shakers?

He’s set to deliver the closing address. Reports suggest Trump will use this prime speaking slot to promote his distinctly un-Davos “America First” worldview. For a man who sees tactical value in picking fights—however ill-considered—that makes sense. Much more interesting will be the reaction the expected Trump comments will elicit. Remember, the opposite of love is indifference, not hate. Trump can handle (and usually welcomes) the animosity his comments provoke; it’s being ignored that knocks him off balance.

Treasury Secretary Mnuchin says he doesn’t think Davos is “a hangout for globalists.” It is. And not just for globalists but for the top 0.001% of globalization’s winners. But global elite status in 2018 isn’t what it was in 2007. As wealth inequality grows larger in countries around the world—the eight richest people on Earth now hold the same total amount of wealth as the poorest 4 billion—globalization’s prime beneficiaries are beginning to consider the consequences.

Earlier this week, Larry Fink, CEO and chairman of BlackRock—the largest asset manager in the world with more than $6 trillion under investment—wrote an open letter to the CEOs of public companies in which his firm invests: “Society is demanding that companies, both public and private, serve a social purpose,” he wrote. “To prosper over time, every company must not only deliver financial performance, but also show how it makes a positive contribution to society. Companies must benefit all of their stakeholders, including shareholders, employees, customers, and the communities in which they operate.”

This would represent a sea-change in how companies think and operate their business; the fact that one of the most powerful individuals on Wall Street would raise this issue publicly underlines the reality that inequality has become an unavoidably obvious threat to everyone’s peace and prosperity. Talk of structural economic inequality will be everywhere at Davos this year.

Yes, international politics are more fraught than we’ve seen in a long time, and technological progress—once heralded as the force that would wire the planet together—appears more likely to divide societies from within as politics become more polarized and job creation appears less certain. All in all, it’s a somber outlook.

But it’s not all bad news—the world has never seen so few people living in extreme poverty. The global economy continues to hum along despite all the political wrenches thrown into its gears. Globalization has always had clear winners and losers, but it’s the losers of globalization that are getting increased attention as of late, and that’s a positive development. Davos used to be a celebration of globalization. It’s now a place where the cross-border flows of ideas, information, people, money, goods and services faces new scrutiny. That’s exactly the type of Davos the world needs in 2018. 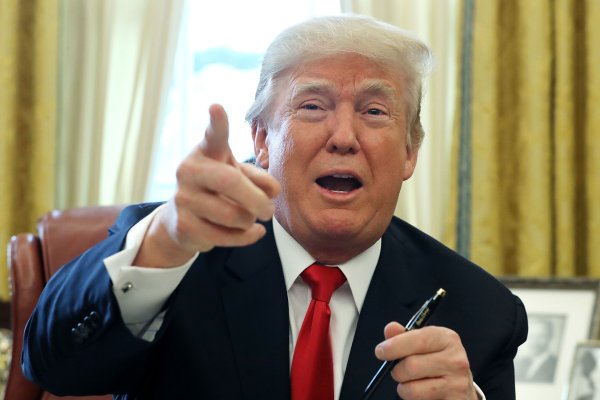