Trump Turns His Back on Pakistan, Giving China an Opportunity

After one year in the White House, President Trump has insulted a wide variety of countries and their governments. But as a debate rages over which form of profanity he used to describe Haiti and sub-Saharan Africa, let’s return to the President’s very first tweet of 2018. “The United States has foolishly given Pakistan more than 33 billion dollars in aid over the last 15 years, and they have given us nothing but lies & deceit,” he wrote.

The U.S. and Pakistan have been through a lot together. In the 1970s, Pakistan’s ability to help drive the Soviets out of Afghanistan brought it closer to the U.S. as Washington distanced itself from socialist-minded India. The Cold War’s end made Pakistan less important for Washington, and the country’s nuclear tests complicated the relationship. But after the Sept. 11 terrorist attacks, President George W. Bush and Pakistan’s strongman Pervez Musharraf formed an uneasy alliance against the Taliban, which brought new waves of U.S. financial aid. In 2004, the U.S. named Pakistan a “major non-NATO ally,” giving it access to military hardware and technology.

Yet despite the flow of cash, Pakistan’s military and security services still appear more interested in battling India than in eliminating threats from Muslim militants. The alliance has been in decline since Osama bin Laden was tracked down and killed in the heart of Abbottabad, a short walk from Pakistan’s elite military academy. Trump now wants better relations with India, thanks to both his personal affinity for India’s Prime Minister Narendra Modi and his desire to find allies to help contain the expansion of China’s influence.

But it’s in Pakistan that declining U.S. influence in the world is most immediately obvious. China is already moving into the vacuum that the U.S. has left behind, spying a means to counterbalance India, gain access to an Indian Ocean port and score a strategic win against Trump. Chinese direct investment in Pakistan topped $837 million from July to November 2017, compared with just $42.6 million from the U.S.

Pakistan still matters for the U.S. The war in next-door Afghanistan is not getting better. Counterterrorism coordination will only become more important as ISIS fighters from Syria and Iraq scatter around the world. Pakistan has nuclear weapons, and its scientists have in the past sold nuclear material to U.S. enemies. This country can become a source of either regional stability or extreme political instability. The U.S. may never get exactly what it pays for in Pakistan, but China will be only too glad to double down on its own investment if Trump decides to cash out entirely on this inconstant ally. 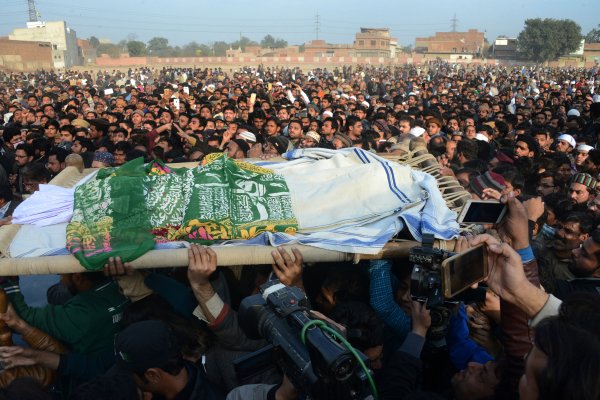