The journalist David Cay Johnston has been following Donald Trump for three decades — when he wasn’t covering the businessman-turned-president himself, he says, “I was feeding stories about him to other reporters just because I had other fish to fry.” Johnston, a Pulitzer Prize-winning investigative reporter, compiles a dossier of sorts in his new book, It’s Even Worse Than You Think: What the Trump Administration Is Doing to America, which focuses on policy over personality. TIME spoke with Johnston following the book’s publication to talk about the president, “political termites,” and that other Trump book, Fire and Fury.

TME: You first met Trump in 1988. How? What have your interactions been since then?

Johnston: I had left the Los Angeles Times to go to Atlantic City for the Philadelphia Inquirer, because I believed casino gambling was going to spread all across the country as the result of a U.S. Supreme Court decision. I met Donald within a couple of days of being there, briefly. Donald, as I began to learn over time, was malicious. And it was obvious that he was the most important figure in town. But I also realized that he was a revealing cultural force in the country. Back then, Donald would plant all sorts of stories, and people just reported what he said. I, like Wayne Barrett and Neil Barsky, I would check what Donald said against the facts, and he wasn’t used to that.

Have you interacted with him since you started this book?

The last time Donald and I spoke was in April of 2016, during the campaign. He called me at home to do what he’s done many times when he’s called me at home: threatened to sue me. He’s been threatening to sue me since 1989. He never has, he never will.

Are you now full-on anti-Trump?

It’s just my job. You can have a great time talking to Donald. I happen to know him better than anybody else and I fact-check him, and Donald is used to creating his own reality. He makes stuff up, or makes assertions, invents lovers like Madonna and Carla Bruni and Kim Basinger. There are journalists out there who don’t care about the facts, they just want a good story. And he likes those kinds of journalists. So when he wants fake news, those are the people he turns to. There’s no animosity about it, it’s just my job. In this case, however, Donald is a very important story. And people still do not understand who he really is.

Let’s talk about your book. Do you think the palace intrigue in a book like Fire and Fury and in news reports distracts from the severity of what’s going on?

Yes. Michael Wolff’s book, first of all, confirms what I reported in The Making of Donald Trump. He’s basically a gossip reporter so I have no doubt that you can find things in his book that aren’t right, but it fundamentally rings true. The rest of the stuff about the palace intrigue, it’s really interesting, I read it all, I would be reading it if I weren’t doing this stuff, but it’s not about what Trump’s doing to you. I’m not a politics person, I’m a policy guy. My whole life, I’ve made it a point to cover Washington, when I do it, from afar.

Some on the left say that Trump isn’t as bad as mainstream Republicans because he isn’t as good at getting things done. What do you say to that?

It’s certainly true that Trump has not accomplished much. He said, ‘There’s gonna be so much winning you’d say, please, please, no more of the winning, we can’t take it.’ And he hasn’t. But that’s taking, I think, a superficial view, because it ignores what these political termites in the agencies are doing. They’re putting lives in danger. They are damaging the economy. They are worsening public health. They’re helping polluters. And this will cause lasting damage to our government.

Speaking of these “termites,” who do you see as the most dangerous people within the administration?

Well, the “termites” are people you don’t see at all, they’re the political appointees who are there, you know, supposedly for 130 days but they stay anyway. But I think that probably the one that’s most troublesome is Scott Pruitt and his team. They clearly intend to destroy the environmental laws that Richard Nixon signed. And the results will take time. I mean, people aren’t going to suddenly keel over from asthma. But the long-term effect of this will be awful.

You know Trump pretty well, but what surprised you most in your research and reporting for this book?

Nothing. Seriously. There’s plenty of video tape of me out there saying what he was going to do. What I said was that he would be increasingly erratic, which he has been. That he’s lazy. That he would do everything he could to gussy up to Putin; he’s distanced himself here and there, but no consequence. None of this has surprised me, it’s played out pretty much as I expected. What I did not expect was that the Republican leadership in Congress would just lose their moral compass. [They’re making] these totally anti-democratic expressions of fealty to the great leader, like at the cabinet meetings.

I know lots and lots of horrible things about Donald that I don’t print or write about because I don’t want to get into a controversy about that. I tie everything to public statements, letters he wrote, court documents. Trust me, if I wanted to just spew what I know, the shock level of people from Fire and Fury would go off the end of the chart. But I don’t do business that way. I write about and talk about what I can prove.

UPDATE: An earlier version of this story incorrectly described the circumstances related to Neil Barsky’s departure from the Wall Street Journal. 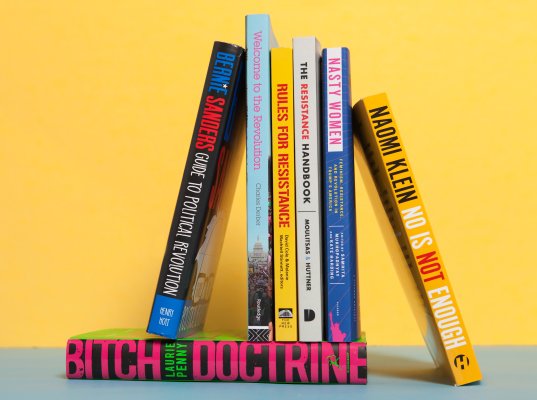 These Books Offer Blueprints for the Resistance
Next Up: Editor's Pick